Catch the Live Updates of the 2nd semi-final between East Zone and South Zone here.

East Zone: 84/10 | Overs 47.3
V Aaron 14
South Zone have taken command and are keeping East Zone under pressure Varun Aaron is putting a fight of some sorts in the middle with his own kind of bowling. He did lose R Dutta. And now even Basant Mohanty has been dismissed leg-before by Pragyan Ojha. And he gets the last wicket as well. East Zone have been bowled out for 84.
OUT! B Mohanty, A Dinda

East Zone: 68/7 | Overs 38
V Aaron 10 (18), R Dutta 10 (43)
A good comeback by the East Zone batsmen as they st5eer the innings forward without the fear of getting follow-on. They are going for the shots as well occasionally and not leeting the bowlers settle down any more and capitalise on the breakthrough they recieved initially.
East Zone: 53/7 | Overs 33
R Dutta 5 (31), V Aaron 0 (1)
OUT!!!!!!!! Tewari is gone. A good lenghth delivery, ball moving away fom the batsmen, tends to play it and takes the outside edge to KL Rahul at the slips.
S Tiwary 17 (43)
East Zone: 53/6 | Overs 32
S tewari 17 (38), R Dutta 5 (31)
Finally, the fiftu up for East Zone. The team who were struggling for four at 27 are steering their innings towards 100 in order to avoid a possible follow-on that would add to an embarrassement. Tewari and Dutta are looking to play sensible cricket from here on.
East Zone: 46/6 | Overs 28
S Tewari 14 (28), R Dutta 2 (14)
With only four wickets remaining, East Zone need to score at least 100 in order to avoid follow-on. Tewari has the ability to play big knocks and has a tremendous job on his shoulders to stter his teams innings from a possible follow-on.
East Zone: 34/6 |Overs 23.1
S Tewari 4 (17)
OUT!!!!!! Another beauty from Binny as he bowls a short-of-length delivery and the ball hits tha bat and pad of Behera and further goes to dismantle the middle stump off the ground. It’s no. 4 for Binny and East Zone are down to the final four men for just 34.
N Behera 8 (b Binny)
East Zone: 27/5 | Overs 20
S Tiwary 0 (8), N behera 5 (24)
Four quick wickets in quick succession and East Zone find themselves in big trouble as they are down to five for just mere 26 runs on the board. Credit must go to Stuart Binny for his excellent bowling performance. He is working the ball good with it’s seam and is helping to swing and turn in every delivery causing massive problems for the batsmen who are unable to play the right strokes and are confused about the balls behaviour after dropping.

East Zone 25/1 | Overs 15
S Chatterjee 11 (25) M Tiwary 4 (15)
Lunch on day two. Good first session for South Zone. First their last pair batted well, then the bowler bowled a disciplined line and length. East zone had a bad start of their innings. Both of their openers were back in the pavilion. N Behera was retired hurt and Poddar lost wicket. So East ZOne are basically two wickets down. Manoj and Sudip now need to play responsible innings.
South Zone 264
HS Sharath 10 (15)
So South Zone are all out for 264. Good last wicket partnership for them. Mithun and Sharath added 28 runs for the last wicket. 264 look decent on this track. Varun Aaron took the last wicket. Now east Zone need to bat well. The first hour will be crucial for them.
A Mithun b V Aaron 21

Hello and welcome to CricketCountry’s live coverage of Duleep Trophy semi-final day 2 between East Zone and South Zone. Laxmi Ratan Shukla, Ashok Dinda, Rana Dutta brought East Zone back in the Duleep Trophy 2014-15 semi-final after Robin Uthappa made his 15th First class hundred. West Zone were cursing at one point when Manish Pandey and Uthappa were batting in full flow. Rana Dutta broke the partnership. After that, Shukla and Monhaty and Dinda rattled the South Zone batting with their seam bowling. Shukla took four for 44 whereas Ashok Dinda and Rana Dutta chipped in with two late wickets. South Zone lost seven wickets for 81 runs in the the post tea session.

Earlier South zone made a steady start in the second semi-final at Lahli, Rohtak after East captain Manoj Tiwary won the toss and decided to bowl first. East Zone fielded a strong pace attack in this match which comprised of Ashok Dinda, Varun Aaron, Basant Mohanty and Rana Dutta and Shukla. 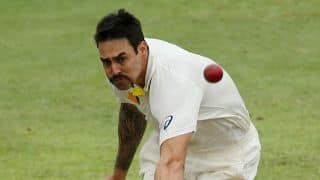