Catch live updates of Day 1 of Haryana vs Assam's Round 6 match here.

Hello and welcome to CricketCountry’s live coverage of Day 1 of the Group A game of the 2015-16 Ranji Trophy between Haryana and Assam, live from CH Bansi Lal Cricket Stadium, Lahli, Rohtak, Haryana. Haryana are currently at the second last position in Group A. They have just five points from four matches. They won none, drew one and lost three matches. Assam on the other hand are in a much better position with 10 points from four matches.They won and lost one match and drew the remaining two. However, there is hope for Haryana. Assam lost their last match against Vidarbha by three wickets while Haryana were able to draw their last match against Bengal. Hence, looking by previous form Haryana are better. READ: Ranji Trophy 2015-16, full coverage here

Live cricket scores Haryana 140/7 | Overs 60 | Batting: RP Sharma 42(121), HV Patel 6(4): Play was stopped due to bad light. At stumps of Day 1, Haryana was 140 for seven from 60 overs with three wickets to spare. On the other hand, Assam’s Krishna Das bagged four wickets and the other three wickets were claimed by Dhiraj Goswami. The last Haryana batsman who was dismissed was R R Dalal. He faced 67 balls scoring 17 before giving a catch to Gokul Sharma. OUT! R R Dalal c Gokul Sharma b Krishna Das 17(67)

Live cricket scores Haryana 91/2 | Overs 36 | Batting: Himanshu Rana 56(118), RP Sharma 22(68): Krishna Das continued his superb run in the ongoing season of Ranji Trophy, struck in the very third over of the day to dismiss Haryana’s Saini. The latter faced just two balls, scoring one run before he gave a catch to Gokul Sharma. RV Dewan the other opener of Haraya fell to Das’s bowling. He scored a 29-ball nine before giving a second catch to Gokul. He was out in the 11th over, leaving the hosts at 20 for 2. OUT! N R Saini c Gokul Sharma b Krishna Das 1(2) OUT! R V Dewan c Gokul Sharma b Krishna Das 9(29)

Haryana’s captain and opening batsman Virender Sehwag recently retired from international cricket. He has been in good form in the tournament. He made a quickfire 46 in the last match too. Haryana will miss his services since he will be playing in Cricket All Stars League in USA. It’s still not clear who’ll lead Haryana in his absence. 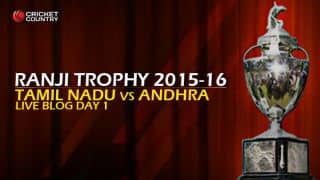