Catch live updates of 13th Place play-off between Canada and Ireland in the ICC Under-19 Cricket World Cup.

Hello and Welcome to CricketCountry’s live coverage of 13th place play-off Semi-final match of the ongoing ICC Under-19 Cricket World Cup. The match will be played between Canada and Ireland Under-19 sides at Sheikh Kamal International Cricket Stadium, Cox’s Bazar. Canada and Ireland were both bottom placed team in their respective group’s B and D respectively.Both Canada and Ireland played three-matches only to end up in all the games. Ireland though had a superior net run-rate than Canada’s -2.640 with -1.705. Canada in their last match lost to Zimbabwe by 6 wickets with more than 18 or so overs remaining. Ireland on the other hand were defeated by South Africa winning the match by 8 wickets. LIVE SCORECARD: Canada vs Ireland, 13th Place Play-off, Cox’s Bazar

Live cricket score Ireland 142/4 | Overs 34.3 | Target 140 | BATTING: Gary McClintock 1(13), William McClintock 20(15): Canada’s Adhihetty bagged three wickets but did not manage to win it for Canada as Ireland ran over them with a six wicket victory in the 13th place play-off.

Live cricket score Ireland 89/2 | Overs 24 | Target 140 | BATTING: Jack Tector 31(67), Gary McClintock 1(13): Canada’s Mamik Luthra and Adhihetty have made a breakthrough each in the match so far. However, from here the Irish need anotehr 51 runs off 26 overs. With a win in this 13th place play-off match, Ireland Under-19 will progress to semi-final for 9th place. OUT! Stephan Doheny 33(49) Adhihetty b Mamik Luthra, OUT! Aaron Gillespie 7(17) c Taploo b Adhihetty

Live cricket score Ireland 29/0 | Overs 6 | Target 140 | BATTING: Stephen Doheny 10(13), Jack Tector 15(26): After bowling out Canada for 139, Ireland after begun their chase decently. Suliman Khan and Prushoth Wijayaraj have opened bowling for Canada from either ends and have managed to keep the Irish openers quiet so far.

Live Cricket Score Canada 139 Overs 48.2| BATTING: Shlok Patel 13 (68): Canada have been bowled out for a low score and Ireland will fancy their chances of winning this game. Their bowlers have been extremely disciplined and their batsmen will now look to put on a professional show and win them the match. OUT! Prushoth Wijayaraj 26 (27)

Live Cricket Score Canada 121/9 | Overs 45| BATTING: Shlok Patel 8 (58), Prushoth Wijayaraj 16 (16): Canada have gone past the 100-run mark, which did not look possible at one stage. With the last pair batting, they will want to score as many as possible and will want their bowlers to have something to bowl at. OUT! Arslan Khan b Tucker 47 (88)

Live Cricket Score Canada 95/8 | Overs 35| BATTING: Arslan Khan 44 (79), Shlok Patel 5 (23): Canada are on the verge of being bowled out for a very cheap score and Ireland should not have any problems in chasing this total down. OUT! Kurt Ramdath c Tucker b Gillespie, Arslan Khan b Tucker 47 (88)

Live Cricket Score Canada 48/5 | Overs 19| BATTING: Arslan Khan 15 (29), Suliman Khan 3 (17): Canada in deep, deep trouble as they have lost half their side within the first 20 overs. Ireland will look to bowl their opposition out for a cheap score soon. OUT! Bhavindu Adhihetty c Tucker b Anders 17 (17), Amish Taploo LBW Anders 1 (7), Harsh Thaker c & b McClintok, Abraash Khan c Tucker b McClintock 0 (2)

Live Cricket Score Canada 22/1 | Overs 5| BATTING: Bhavindu Adhihetty 16 (15), Harsh Thaker 0 (8): Canada have already lost an early wicket, having put into bat by Ireland. Ireland will be hoping that they can make further inroads before the end of the first powerplay. OUT! Thursaath Anantharajah c Gillespie b Anders 2 (7)

Canada started their campaign win a resounding defeat by the hands of Sri Lanka losing the game by a huge margin of 196 runs. Second match no different where again they tasted defeat from losing to Pakistan by 7 wickets. Third match was a larger defeat as Afghanistan team chased down their target of 147 runs 24.2 overs only, thus coming last in the group C. Ireland results were no different, losing their opening affair to India by 79 runs. Ireland were again defeated this time by underdogs Nepal by 8 wickets defending a total of 131 runs. Finally they lost to New Zealand, this was a close match as compared to others losing it by 4 wickets. Canada top-scorer this edition has been Arslan Khan making 125 runs in four matches, closely followed by Abraash Khan making 124 runs. Ireland top scorer has been Lorcan Tucker making 163 runs in four matches. Rory Anders has been the most successful wicket taker for Ireland picking 7 wickets in four matches. 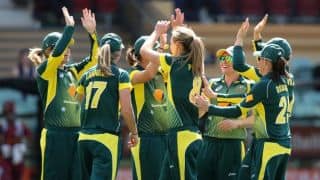