Welcome to Cricket Country's live blog of the 13th place play-off semi-final game of the 2016 ICC Under 19 World Cup between Ireland and Scotland.

Good Morning! Hello and Welcome to Cricket Country’s live coverage of the 13th place play-off semi-final game of the 2016 ICC Under 19 World Cup between Ireland and Scotland at the Sheikh Kamal International Cricket Stadium in Cox’s Bazar on Wednesday. Ireland have had an awful time in the entire tournament as they have registered one single victory in five games so far. Scotland too have gone through a similar phase as they have remained winless in four outings but managed a victory in their 13th place semi-final game against Fiji. Both the teams are in the bottom part of the table and will look to end the tournament on a winning note. LIVE SCORECARD: Ireland and Scotland, 13th Place Semi-Final of ICC Under-19 Cricket World Cup

Live Cricket Score, Scotland 132/8 in overs 41.1| Target 236 | Batting: Mohammad Ghaffar 3(7), Simon Whait 2(9): Scotland are on the verge of getting bowled out for under-150 runs. They have lost all their major batsmen and we are already running in their tail. Harry Tector has picked up four wickets and will be hoping to take a fiver. He was well supported by Rory Anders, who chipped in with two wickets. OUT! Finlay McCreath c Jack Tector b Rory Anders 15(48), OUT! Ben Wilkinson c Doheny b Harry Tector 11(31), OUT! Rory Johnston c Jack Tector b Rory Anders 19(38), OUT! Ryan Brown lbw Harry Tector 5(7), OUT! Haris Aslam c Lorcan Tucker b Harry Tector 7(12)
Live Cricket Score, Scotland 62/3 in overs 19| Target 236 | Batting: Finlay McCreath 3(8), Ben Wilkinson 4(11): Scotland lose two more wickets in the form of Azeeam Dar and Owais Shah for 17 and 10 runs respectively. Two new batters— Finlay McCreath and Ben Wilkinson are at the crease currently. Three bowlers have picked the wickets that have fallen viz. Rory Anders, Gary McClintock and Fiachra Tucker. OUT! Azeem Dar c Lorcan Tucker b Gary McClintock 17(39), OUT! Owais Shah c&b Fiachra Tucker 10(30)

Live Cricket Score, Scotland 26/1 in overs 7.1| Target 236 | Batting: Azeem Dar 5(16), Owais Shah 0(1): Ireland draw first blood; Rory Anders sends Scotland’s skipper Neil Flack back to the hut for 19 runs. It’s a slow start for Scotland. They are not chasing a big total and hence can afford to play a few overs and get their eye in. But once that is set, they should keep batting at a decent rate without losing any wickets. Scots now require 210 more runs from 257 balls with nine wickets in hand. OUT! Neil Flack c William McClintock b Rory Anders 19(26)

Live Cricket Score, Ireland 152/4 in overs 35| Batting: William McClintock 16 (15), Lorcan Tucker 35(50): Runs are coming majorly off singles. Some rare boundaries come from McClintock’s bat. Ireland will look to up the tempo after the next 5-10 overs. OUT! Gary McClintock st Whait b Aslam 27 (64)

Live Cricket Score, Ireland 100/2 in overs 30| Batting: Gary McClintock 24 (54), Lorcan Tucker 5(15): The runrate is going down with every wicket and Ireland lost yet another one. A set Doheny went back for 45 missing out on his half century by just 5 runs. Meanwhile 100 comes up for Ireland. One batsman from here will have to stay at the crease and take things forward. OUT! Stephen Doheny lbw b Mohammad Ghaffar 45 (70)

Live Cricket Score, Ireland 86/2 in overs 24| Batting: Gary McClintock 8(15), Stephen Doheny 21(36): The runrate is too slow and the Ireland batsmen need to accelerate it. The bowlers are doing a great job as they have stopped the batsmen from scoring quick runs. Some rare boundaries which the Irishmen need to hit more frequently. Another wicket here can cause trouble.

Live Cricket Score, Ireland 59/2 in overs 18| Batting: Gary McClintock 8(15), Stephen Doheny 21(36): And it’s drinks. Ireland lost yet another wicket as Gillespie went for 9 runs. The two batsmen at the crease must build up a good partnership as that will help their team to put up a good score on the board. OUT! Aaron Gillespie c Aslam b Ihtisham Malik 9 (20)

Live Cricket Score, Ireland 43/1 in overs 12| Batting: Aaron Gillespie 8(15), Stephen Doheny 21(36): And the very first success for the Scotland team as they remove Ireland opener Jack Tector. Not a very good news for the batting team. Gillespie is making sure that boundaries come in every over. The Ireland team need to put up a good score and lose no more wickets. OUT! Jack Tector st Whait b Brown 10 (21)

Live Cricket Score, Ireland 23/0 in overs 6| Batting: Jack Tector 5(15), Stephen Doheny 14(21): A good start by the Irish boys as they have managed to hit few boundaries early in the innings. Singles and doubles are coming less in number and they need to steal them. The Scotland bowlers also look keen to produce an early breakthrough here.

Toss: Scotland Under-19 won the toss and chose to field

Ireland lost their all three fixtures in the group stages against India, Nepal and New Zealand after which they locked horns with South Africa in the 9th place play-off quarter-final against South Africa but remain winless. Then came a moment of glory for them as they won the 13th place semi-final against Canada. Scotland endured a series of defeats against Namibia, Bangladesh, South Africa and New Zealand. But won the 13th place play-off semi-final against Fiji. This is a golden opportunity for both the teams to finish the league on a high. The winner of this game will be conferred the 13th position in the tournament. 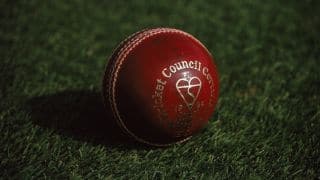