Australia won their sixth World Cup win as they beat West Indies by 114 runs in the final match of the 2013 ICC Women's World Cup against Australia in Mumbai on Sunday. 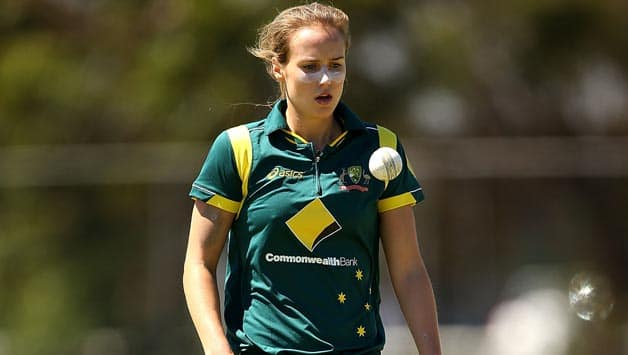 Australia won their sixth World Cup win as they beat West Indies by 114 runs in the final match of the 2013 ICC Women’s World Cup against Australia in Mumbai on Sunday.

Earlier, Australia made 259 for seven in 50 overs.  After a middle-order collapse, Ellyse Perry (25 not out) and captain Jodie Fields (36 not out) buoyed the team from 209 for seven in thr 44th over to 259, a competitive total.

Australia lost three wickets in the five Batting Powerplay overs and scored just 15 runs as the West Indies clawed back into the match. Australia are on 192 for six in 40 overs after Jess Cameron (75), Lisa Sthalekar (12) and Sarah Coyte (7) fell in quick succession.

Jess Cameron reached her half century as Australia took the secod drinks break at 169 for three in 34 overs. Cameron is batting on 64, coming off 67 balls, along with veteran Lisa Sthalekar (11 not out).

Alex Blackwell (3) could last just nine balls as West Indies’ Tremayne Smartt picked up wicket no 3. Australia are 127 for three in 29 overs.

Opener Rachel Haynes struck a half century and was dismissed at the stroke of the halfway point of the innings as Australia reached 116 for two in 25 overs. Haynes’s 52 came off 74 balls before she holed out to Kyshona Knight at midwicket off Shaquana Quintyne’s bowling.

The wicket broke a 64-run stand between Haynes and Jess Cameron (27 not out).

Rachel Haynes (36 not out) and Jess Cameron (14 not out) carried on after Meg Lanning’s dismissal and look set for a good partnership. Australia are on 86 for one in 18 overs.

Australia lost opener Meg Lanning (31) on the last ball of the tenth over as they reached 52 for one. Lanning mis-timed hit off Stafanie Taylor went straight to Kyshona Knight at mid-off. Jess Cameron is the new batswoman in.

Australia made a confident start after winning the toss and electing to bat, as they reached 28 for no loss in five overs against the West Indies. Meg Lanning was unbeaten on 21, accompanied by Rachel Haynes on six.

Five-time champions Australia will take on surprise package West Indies in the final of the ICC Women’s World Cup 2013 at the Brabourne Stadium today.

The West Indies beat Australia in the Super Six stage of the tournament to clinch a place in the final and will be boosted by their performance. However, Australia had a couple of key players missing from the game and the team from the Caribbean have a big task ahead of them if they are to win the cup.

It will be the tenth final of the women’s showcase event, which began in 1973, and the third final in India.

Both teams have had contrasting paths to the final. Australia, the most successful team to date in tournament history, won all but one of its matches on way to the final with the side losing just to its fellow finalist, the West Indies, in its last Super Six game.

The women from the Caribbean managed one win in the group stage, to secure their Super Six position, before winning all three vital Super Six matches. The West Indies‘ win over Australia in their last Super Six game ousted defending champions England and New Zealand out of championship contention and, for the first time since 2009, there will be a new team at the top of the ODI rankings after England’s slip to third post-tournament.