R Vinay Kumar bagged three wickets and R Ashwin two as India restricted Sri Lanka to 236 for nine in their Commonwealth Bank tri-series match at the Adelaide Oval on Tuesday. 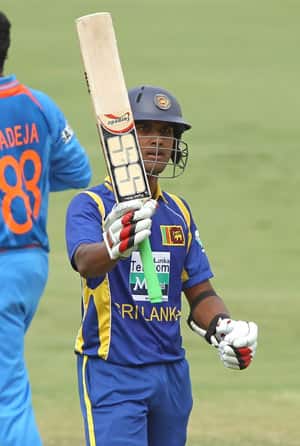 Dinesh Chandimal missed out on a century Getty Images

R Vinay Kumar bagged three wickets and R Ashwin two as India restricted Sri Lanka to 236 for nine in their Commonwealth Bank tri-series match at the Adelaide Oval on Tuesday.

After being put in to bowl first, India did not allow Sri Lankan batsmen to settle in and make big scores, as they bowled good lines and kept breaking partnerships at regular intervals.

R Vinay Kumar jolted Sri Lanka on the very second ball of the match when he had opener Upul Tharanga caught by Indian skipper MS Dhoni for a duck.

Tillakaratne Dilshan, who showed aggressive intent hitting a six and a four, fell to Irfan Pathan for 16 and adding 28 runs for the second wicket with Kumar Sangakkara.

Sangakkara failed to convert a good start into a big score when he fell to spinner R Ashwin for 31, which came off 56 balls and two boundaries.

Young middle order batsman Chandimal was the only Sri Lankan batsman to put up a fight against India with his knock of 81 off 91 balls, which included six boundaries and a six.

Chandimal was involved in two crucial partnerships for the Sri Lankans, which pushed them past 200. He added 51 runs for the third wicket with Sangakkara and 94 runs for the fifth with Mahela Jayawardene to strengthen his side s position.

Jayawardene missed out on a half-century when he fell for 43, which came from 49 balls and included two boundaries.

Spinner R Ashwin was impressive with the ball taking two wickets for 30 runs in his spell of 10 overs.