Hello and welcome to CricketCountry’s coverage of the second of the two-match T20I series between India and Zimbabwe at the Harare Sports Club in Harare on Sunday. This is Pramod Ananth here, and I will be presenting to you the live updates from the match. India take on Zimbabwe in the second T20 International (T20I) at Harare. India cruised to a 54-run win the first T20I at the same venue and will look to win the second one to complete a clean sweep yet again. Robin Uthappa was the top scorer for India in the first T20I with an unbeaten 39. Catch ball by ball commentary of the India vs Zimbabwe, 2nd T20I at Harare here

Zimbabwe record their first ever T20I against India and end the series on a high. They will be delighted with their performance today aand Sikandar Raza’s captaincy was spot on today. India have themselves to blame for this loss. Chamu Chibhabha deservedly receiving the man of the match for bhis heroics with the bat and a brilliant catch in the deep to dismiss Stuart Binny. Through this win Zimbabwe have leveled the 2-match series 1-1. Here’s Amit Banerjee’s match report

Live cricket score India 135/9 | Overs 20| Target 146|  BATTING: Mohit Sharma 3 (3), Sandeep Sharma 1 (1). THREE! Yorker from Mpofu and Bhuvi digs it out. but the batsmen scamper for three. ONE BYE! Swing and a miss from Mohit, batsmen run through. Bhuvneshwar is rin out at the non striker’s end. TWO! In the air and Raza’s acrobatic effort in vain as he drops a difficult catch. ONE! PLayed down the ground. ONe to finish. ZIMBABWE WIN! OUT Bhuvneshwar Kumar run out 9 (6)

Live cricket score India 127/8 | Overs 19| Target 146|  BATTING: Bhuvneshwar Kumar 6 (4), Mohit Sharma 0 (0). Muzarubani now. Buvi off the mark with a couple. ONE! Played to deep square. DOT! Yorker, Akshar digs it out. OUT! Full toss and Akshar holes out in the deep. TWO! Bhuvi hits it over covers. ONE to finish.

Live cricket score India 121/7 | Overs 18| Target 146|  BATTING: Akshar Patel 13 (13). Mpofu now. TWO! Akshar plays it to the vacant mid wicket area. DOT!Akshar has a swing, but misses. ONE! Akshar plays to deep mid wicket. OUT! Samson plays it straight to the man at long off. FOUR! Akshar squeezes a yorker to the third man fence. DOT to finish.  OUT! Sanju Samson c Waller b Mpofu 19 (24)

Live cricket score India 109/6 | Overs 16| Target 146|  BATTING: Sanju Samson 18 (22), Akshar Patel 2 (3). Cremer now. OUT! Binny goes inside out, but a brilliant catch in the deep sees him being dismissed for 24. ONE! Samson plays the ball on the off side. Akshar Patel is the new batsman. DOT! Played to cover. ONE! Akshar sweeps to deep square leg.  ONE! Samson plays it to deep mid wicket. ONE to finish Cremer’s spell. Three wickets for him.   OUT! Stuart Binny c Chibhabha b Cremer 24 (23)

Live cricket score India 69/5 | Overs 9| Target 146|  BATTING:  Stuart Binny 5 (6). Cremer continues. ONE! Jadhav drives through covers. DOT! Binny defends. ONE! Binny plays through covers. ONE! Jadhav playson the leg side. TWO! Binny plays with soft hands on the leg side. OUT! The batsmen look for another quick couple but a direct throw, dismisses Jadhav at the non striker’s end.  OUT! Kedar Jhadav run out 5 (6)

Live cricket score India 63/4 | Overs 8| Target 146|  BATTING: Kedar Jhadav 3 (4), Stuart Binny 1 (2). Sean Williams continues. ONE! Jhadav plays it to short third man. TWO! Uthappa plays with soft hands and collects a couple of runs. Good running. OUT! Uthappa plays one back straight to Williams. ONE! New batsman is off the mark. ONE! Jadhavv collects a single through covers. DOT to finish a successful over for Zimbabwe.  OUT! Robin Uthappa c & b Williams 42 (25)

Live cricket score India 57/1 | Overs 6  BATTING:Murali Vijay 13 (10), Robin Uthappa 40 (23). Sean Williams now. ONE! Vijay plays it down the ground. ONE! Uthappa too goes down the ground. SIX! Vujay sweeps it over the square leg fence. 50 up . ONE! Sensible from Vijay. DOT! Wrapped on the pads. FOUR! Reverse sweep from Uthappa. Another good over for India.

Live cricket score India 35/1 | Overs 4  BATTING:Murali Vijay 4 (3), Robin Uthappa 27 (18). Chris Mpofu into the attack now. Surprise bowlong change as Muzarabani bowled an excellent first over. DOT! Uthappa is beaten outside off. FOUR! Uthappa pulls the ball off the front foot through the mid wicket fence. DOT! Played defensively, stopped by the bowler. FOUR! Beautiful leg glance fetches a boundary. FOUR! Uthappa on fire as he smashes the ball to the mid wicket fence. DOT to finish. Expensive over.

Live cricket score India 23/1 | Overs 3  BATTING:Murali Vijay 4 (3), Robin Uthappa 15 (12). Prosper Utsea into the attack. 8 runs coming off the second over and India now look to consolidate in the third over now. Murali Vijay and Uthappa now look to be aggressive as Uthappa chips Utseya throughthe mid wicket fence. Sensible batting from the batsmen

Live cricket score Zimbabwe 145/7 | Overs 20  BATTING: Malcom Waller 6 (6), Graeme Cremer 0 (1). Mohit bowls the final over. DOT! Swing and a miss from Waller. ONE! Waller smashes it down the ground. OUT! Utesya plays it to Akshar, who runs in from deep square leg. TWO! Squeezed through point. ONE! Smashed to deep square leg. DOT! Swing and a miss.OUT! Prosper Utseya c Akshar b Mohit

Live cricket score Zimbabwe 141/6 | Overs 19  BATTING: Malcom Waller 2 (2), Prosper Utseya 1 (1) . Bhuvneshwar Kumar continues. OUT! Chibhabha gets a full delivery and hits the wickets after it goes through his legs. ONE! New batsman Malcom Waller is immediately off the mark. WIDE! Bhuvi bowls way outside off. WIDE! Bhuvi again bowls way outside off and Uthappa is not able to stop it. 5 bonus runs for Zimbabwe. DOT! On the money this time. A full ball on the toes. Good couple of deliveriues to finish.  OUT! Yorker and Ervine’s stumps are uprooted OUT! Chamu  Chibhabha b Bhuvneshwar 67 (51), Craig Ervine b Bhuvneshwar 7 (9)

Live cricket score Zimbabwe 132/4 | Overs 18  BATTING: Chamu Chabhabha 67 (50), Craig Ervine 7 (7) FOUR! Chibhabha looks to take on the bowling now.  ONE! Edged to third man. FOUR! Ervine goes over the mid off fielder. DOT! A slow, short delivery by Mohit outside off. ONE! Pulled to square leg.

Live cricket score Zimbabwe 104/3 | Overs 14 BATTING: Chamu Chabhabha 49 (37), Charles Coventry 2 (6). Akshar to bowl his final over. DOT! Chibhabha plays it on the offside. ONE! Played to long on. DOT! Coventry plays it to point. DOT! Coventry fails to connect the sweep. ONE! Coventry edges one past the bowler. FOUR to finish the over.

Live cricket score Zimbabwe 85/2 | Overs 11 BATTING: Chamu Chabhabha 32 (26), Sean Williams 17 (17). Sandeep Sharma into the attack. ONE! Williams slaps it to long off. ONE! Yorker by Sandeep, takes an inside edge goes to long leg. ONE! Low full toss played to long on. ONE! Full toss outside off, played to long off. FOUR! Williams smashes the ball over square leg. ONE to finish.

Live cricket score Zimbabwe 76/2 | Overs 10 BATTING: Chamu Chabhabha 30 (24), Sean Williams 10 (13). Akshar Patel continues. Williams charges down the track and drives it to long on. DOT! Chibhabha plays it to ppint. ONE! Played to long off. ONE! Pulled to deep square leg by Williams. FOUR! Chibhabha rocks back and pulls to mid wicket. TWO! Played to wide long on.

Live cricket score Zimbabwe 63/2 | Overs 8 BATTING: Chamu Chabhabha 23 (17), Sean Williams 5 (8). Akshar Patel into the attack.FOUR BYES! Misses everything to boundary. ONE! Worlked down the leg side by Williams. ONE! Chibhabha punches off the back foot on the leg side. ONE! Williams in front of square.  Chibhabha quietly plays it away for a single.

Live cricket score Zimbabwe 55/2 | Overs 7 BATTING: Chamu Chabhabha 21 (15), Sean Williams 3 (4). Murali Vijay into the attack.ONE! Chibhabha cuts the ball to the deep. ONE! played on the off side, sweeper collects. ONE! Chibhabha slices over point. ONE! Sean Wiliams charges down the track and hits it over covers. ONE to finish.

Live cricket score Zimbabwe 45/1 | Overs 5 BATTING: Chamu Chabhabha 14 (9), Sikandar Raza 8 (5). Stuart Binny into the attack. DOT! Raza comes down the track, has a heave, misses it completely. FOUR! Raza pulls the ball to the mid wicket fence. ONE Played to third man. DOT Played to mid wicket. FOUR! Raza smashes it to covers. ONE! Played to mid on.

Live cricket score Zimbabwe 35/1 | Overs 4 BATTING: Chamu Chabhabha 9 (6), Sikandar Raza 3 (2). DOT! Sandeep oversteps. FREE HIT! SIX! Masakadza smashes the ball over the long on fence. OUT! Masakadza edges one to Uthappa. Sandeep picks up his first international wicket. ONE! Raza gets three on the off side. FOUR! Chibhabha  smashes the ball to the square leg fence. Chihabha is beaten outside off. OUT! Hamilton Masakadza c Uthappa b Sandeep 19 (17)

Live cricket score Zimbabwe 21/0 | Overs 3 BATTING: Hamilton Masakadza 13 (14), Chamu Chabhabha 5 (4). Bhuvneshwar continues. FOUR! Short from Bhuvi, Masakadza quick to latch on to it as he pulls it for a four. DOT! Masakadza plays and misses outside off. DOT! Short ball, Masakadza leaves it alone. DOT! Bhuvi nowls down leg, but not adjudged wide. Masakadza not happy. ONE! Quick single on the off side. DOT! Played on off.

Live cricket score Zimbabwe 7/0 | Overs 1 BATTING: Hamilton Masakadza 7 (6), Chamu Chabhabha 0 (0). Zimbabwe off to a positive start but none of the shots they played are genuine cricket shots. Bhuvneshwar Kumar bowls a good over but Zimbabwe need to play much better now.

Elton Chigumbura has suffered an injury and will miss out as a result of which Sikandar Raza is will lead the side. Harbhajan Singh has been rested and Sanju Samson makes his international debut.

Toss: Zimbabwe have won the toss, will bat first

He along with other players like Murali Vijay, Manish Pandey and skipper Ajinkya Rahane will look to contribute a bit more than what they did in the first match. As far as the bowling goes, it will be interesting to see if fast bowler Sandeep Sharma gets a game after he was very expensive on his international debut. India vs Zimbabwe 2015, 2nd T20I at Harare: Preview

Sanju Samson, who was called as a replacement for Ambati Rayudu might get an opportunity to make his international debut in place of either Manoj Tiwary or Kedar Jhadav. For Zimbabwe, they will look to their bowlers to be much more disciplined in this game than they were in the previous game as the gave away 23 extras. They must look to save every run possible in order to have any chance against this rampant Indian team. Elton Chigumbura will be aware of that and would have instructed his boys on the same. Top order batsmen like Chamu Chibhabha, Hamilton Masakadza and the skipper himself must step up to the plate and score some runs to ease the pressure on the middle-order and lower-order. READ: India aim to end Zimbabwe tour 2015 on winning note

Catch ball by ball commentary of the India vs Zimbabwe, 2nd T20I at Harare here 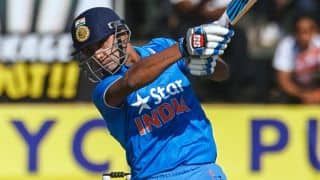