India would look to whitewash Australia while the hosts will seek resurgence with a win in the third T20I.

Hello and welcome to CricketCountry’s live coverage of the third match of the three-match Twenty20 International (T20I) series at Sydney.  This is Paulami Chakraborty, and I shall keep you updated with the events of the match as and when they happen. India Women have already bagged the series 2-0 as they won the rain affected second T20I at Melbourne. This was the team’s first bilateral series win in Australia. India would look to whitewash Australia while the hosts will seek resurgence with a win in the third T20I. Team India is lead by Mithali Raj and Australia is lead by Meg Lanning. In 2015, Lanning was named as ICC Women’s One-Day International (ODI) Cricketer of the Year. LIVE CRICKET SCORECARD: Australia Women vs India Women, 3rd T20I at Sydney

Live Cricket Score, India Women 121/8 in overs 20, Batting: Sushma Verma 2(4), Deepti Sharma 13(13): Australia Women win by 15 runs! It has been an Ellyse Perry show all over. After a match winning knock of 55 not-out, Perry went on to register her career best 4 for 12 with the ball. India Women gave a great fight but the day belonged to the hosts. Here is the match report.

Player of the Match: Ellyse Perry

Player of the Series: Jhulan Goswami

Live Cricket Score, India Women 102/4 in overs 15, Batting: Anuja Patil 2(4), Smriti Mandhana 3(3): The Indian innings had slowed down and runs were coming in singles but Kaur took the charge and hit a couple of sixes and a four to increase pressure on Australia bowlers. But Perry came into action and removed the dangerous batsman. Anuja Patil takes the crease.

Live Cricket Score, India Women 74/3 in overs 12, Batting: Harmanpreet Kaur 7(11), Smriti Mandhana 3(3): And Grace Harris strikes. India need to play carefully. Some sensible cricket is expected at this stage after losing back to back wickets and the last few overs didn’t bring good runs as well.

Live Cricket Score, India Women 54/2 in overs 9, Batting: Harmanpreet Kaur 2(4), Veda Krishnamurthy 9(13): 50 up for India but they have lost wickets as well. The run on the board looks quite promising and the chase seems to be quite easy. Australia need quite a few wickets here as the target is not quite big.

Live Cricket Score, India Women 22/0 in overs 3, Batting: Vellaswamy Vanitha 17(13), Mithali Raj 3(5): Despite an injury earlier in the match, Raj has opened with Vanitha. And they have got a great start here. Six and boundaries in the first three overs and Australia need wickets urgently.

Live Cricket Score, Australia Women 136/5 in overs 20, Batting: Ellyse Perry 55(41), Alex Blackwell 4(4): And a six to finish the over! Ellyse Perry played a superb innings to remain unbeaten at 55. It came in time, exactly when her team needed it. Australia have put up a decent score and India would now look forward to chase it for a 3-0 whitewash. Here is how the teams performed in the first innings.

Live Cricket Score, Australia Women 108/5 in overs 18, Batting: Ellyse Perry 31(33): And the fielders come into action now and do it for India. Harris looked in good touch as she had just started to hit biggies but had to depart. A brilliant piece of fielding as the direct hit took the bails off.

Live Cricket Score, Australia Women 67/2 in overs 12, Batting: Ellyse Perry 8(14), Beth Mooney 33(32): Australia Women are cruising to a great total as they are looking quite fearless. Mooney is continuing with the hard hitting and India need wickets.

Live Cricket Score, Australia Women 55/2 in overs 9, Batting: Ellyse Perry 4(5), Beth Mooney 25(23): And another wicket! Rajeshwari Gayakwad takes a much needed wicket as Aussie skipper departs for 26. She looked in good touch and hit quite a few classy shots.

Live Cricket Score, Australia Women 14/1 in overs 6, Batting: Meg Lanning 3(11), Beth Mooney 11(7): And Meg Lanning is hammering the bowlers here. huge six over long off in the sixes and fours pouring in and the Indian bowlers need to find a way out to stop Lanning. Mooney will have to provide the support from the other end rotating the strike

Live Cricket Score, Australia Women 14/1 in overs 3, Batting: Meg Lanning 3(11), Beth Mooney 11(7): What a brilliant first over from Jhulan Goswami! But a bad news for India as skipper Mithali Raj has injured herself in an attempt to stop the ball. Pressure increased for Australia Women and they will have to play sensible cricket now.

Toss: India Women have won the toss and elected to bowl first

The second T20I was highly affected by the rain. The match had a delayed start and after a thorough discussion, the match was curtailed to 18-overs for each side. The India Women won the toss and put the hosts to bat. Australia Women, commonly called Southern Stars, could not live up to the expectations. They lost their first few wickets in quick succession increasing the pressure. Skipper Meg Lanning played a captain’s knock and scored a 39-ball 49, missing on her half-century by a solitary run. Jess Jonassen remained the second highest scorer with her 27 and Australia ended with 125 for 8 on the board.

Indian openers Mithali Raj and Smriti Mandhana started hitting fearlessly as soon as they took the crease but rain played foul again. The umpires had a further discussion and were compelled to cut the match down win 10 overs in total to play for India. As India Women resumed after rain, they needed 13 runs off 12 balls and the two batsmen at the crease comfortably took their side to a victory.

The star performer of the match was Jhulan Goswami for India who removed both the Aussie openers within 4.1 overs giving away 16 runs. Goswami was handed the Man of the Match. 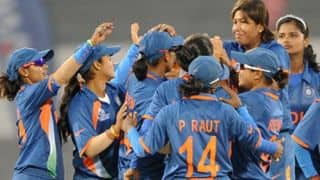