Wasim Jaffer and Ajinkya Rahane set up an interesting three days ahead after parrying Mumbai to 155 for two at stumps on Day Two of the Irani Trophy against Rest of India. Wasim Jaffer and Ajinkya Rahane set up an interesting three days ahead after parrying Mumbai to 155 for two at stumps on Day Two of the Irani Trophy against Rest of India.

Jaffer was out for a well-made 80, while Rahane was unbeaten on 55. Mumbai have the likes of Sachin Tendulkar and Rohit Sharma still to come.

Mumbai are off to a steady start in their chase of Rest of India’s mammoth 526, with Wasim Jaffer and Ajinkya Rahane looking in good touch.

Mumbai have reached 70 for one in 18 overs, with Jaffer unbeaten on 36 and Rahane batting on 24.

Wicketkeeper batsman Aditya Tare was the only wicket to fall for the hosts. Tare found the edge off Ishwar Pandey and the ball flew to Manoj Tiwary at fourth slip.

Rest of India were finally bowled out for a mammoth 526 by Mumbai after lunch on Day Two of the Irani Trophy, but not before Suresh Raina (134) and Abhimanyu Mithun (51) ensured the lower middle order and tail wagged considerably.

Suresh Raina and Abhimanyu Mithun upped the ante at the Wankhede and propelled Rest of India to 481 for six at lunch on Day Two of the Irani Trophy.

Raina struck 13 boundaries and three sixes in his 114, which came in 159 balls at a strike rate of 71.69. A major chunk of his runs came on the off-side backward of square as he toyed around with Mumbai’s hapless attack.

Mithun, meanwhile, scored his 46 not out off 85 balls including eight boundaries and a six.

Rest of India’s Suresh Raina neared a vital century in the first session of Day Two of the Irani Trophy against Mumbai. RoI are 416 for six in 110 overs.

Harbhajan SIngh was the only wicket to fall in the morning, after finding a leading edge off Dhawal Kulkarni.

Earlier on Day One, Murali Vijay scored a century to help Rest of India put up a formidable total of 330 for five at the end of day’s play on the first day of the Irani Tropht 2012-13 against Mumbai on Wednesday.

Vijay and Shikhar Dhawan (63) put on 144 runs for the first wicket and Mumbai put RoI in to bat.

Mumbai skipper Abhishek Nayar dismissed Vijay after the latter scored 116 off 206 deliveries. His knock was laced with 17 fours and a six. He got to his ton with an upper-cut six and a four to the long-on fence as he knocked on the doors of the selectors.

Rest of India lost left-handed opener Dhawan for 63 to Shardul Thakur (one for 55) after the Delhi batsman dragged a widish delivery onto his stumps. But this was after Dhawan shared a century stand with Vijay at the top of the order.

Day Two will be crucial for Mumbai as they will look to bowl the opposition out for as little as possible and stay in the game. 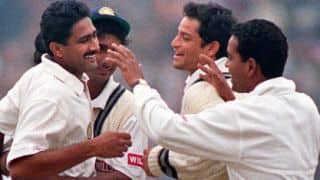