Hello and welcome to CricketCountry’s coverage of Karnataka Premier League (KPL) 2015. Today, in the 19th match of KPL 2015, Bijapur Bulls take on Rock Stars at the Srikantadatta Narasimha Raja Wadeyar Ground, Mysore. The tournament is in its middle stage and all the teams are looking to stay within the top four in the points table. At this stage, winning the game and securing crucial points is the one and only objective for the teams. Rohit Sabharwal-led Mangalore United are in the fourth position at the points table whereas the Balachandra Akhil-led Bijapur Bulls are taking on Sudeep’s Rock Stars, who are at the bottom of the table. Both these teams a win or loss here can decide their future in the current edition of the tournament. Get all the updates of the Bijapur Bulls vs Rock Stars match here.

Live Cricket Score Rock Stars 70/8 | Overs 15 (Target 198): Rock Stars have lost eight wickets, but their end could have been swifter had the dominant opposition not dropped two catches in the 10th over. Uthappa, the wicketkeeper, dropped the first chance, off Dhruv, and the man  at long-off, Nidesh, dropped another, to provide reprieve to Raghu C. But Dhruv was out in the next over, to fast bowler Abhimanyu Mithun. Wickets have been shared around, with Sunil Raju and Cariappa taking two each, and others one. Batting: Prathap Narayan1 (2), Charan 1 (1)

Live Cricket Score Rock Stars 43/4 | Overs 8 (Target 198): Rock Stars have lost four early wickets in their chase of 198, and the run-rate has remained low as well. Their captain Sudeep is the latest to go, for one off five balls. A wicket each has fallen in the fifth, sixth and seventh overs, and this has derailed the chase. Batting: Dhruv0 (0), Raghu C 4 (10)

Live Cricket Score Bijapur Bulls 197/5 | Overs 20: Six sixes and two fours in the last two overs have propelled Bijapur Bulls to 197, which did not look likely when the top order was going along sedately. Balachandra Akhil, the captain, smashed an impressive 69 off 22 balls, studded with six sixes and six fours. The run rate lifted after the fourth wicket fell in the 15th over. Rock Stars have an uphill task ahead of them to register their first win of the competition. Not Out: Akhil 69 (22), Mithun 0 (0)

Live Cricket Score Bijapur Bulls 106/3 | Overs 15: Nidhish, the opener, has reached his half-century with a clumsy slog sweep to midwicket that travelled to the boundary. He immediately opted to attempt an attacking shot off the next ball, and was dropped at mid-on after a diving attempt by the fielder. Uthappa reverse-sweeps for a boundary,  before another dry period. Uthappa, in the 15th over, tried to hit a six through leg, but instead provided a catch to deep square leg. Off the next ball, the set opener received a long hop and pulled the ball high, only for the fielder at midwicket to take a good catch. Batting: Raju 1 (2), Bhatkal 1 (1)

Live Cricket Score Bijapur Bulls 69/1 | Overs 10: A steady start has been crafted by the top order of the Bijapur Bulls, who have been inserted in to bat by Sudeep, the Rock Stars’ captain. Ravikumar Samarth, the opener, got out after scoring 17 off 25 deliveries, and so far only four fours have been hit in the innings. Robin Uthappa, the No. 3, hit the first six of the match by pulling with authority a short ball by Charan. The pitch seems to be slow and not easy for shot-making. Batting: Uthappa 8 (6), Nidesh38 (30) 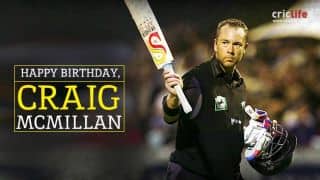 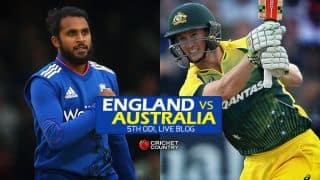