Hello and welcome to CricketCountry s coverage of Karnataka Premier League (KPL) 2015. Today in the match 25 of KPL 2015 Bellary Tuskers are taking on Hubli Tigers at the Srikantadatta Narasimha Raja Wadeyar Ground, Mysore. Both teams have played six games each and both have won three. However Hubli have the edge in the points table since they got one point for a washed out game while losing two, whereas Bellary have lost three games. A win will be crucial to both sides in their endeavour to proceed to the next round of the tournament by finishing in the top four. Karnataka Premier League (KPL) 2015 Points Table

Man of the Match: S Akshay, for his frugal bowling: He gave away 12 runs in his four overs, and picked up a wicket. Hubli Tigers have qualified for the playoffs.

Live Cricket Score Bellary Tuskers 107/6 | 20 overs: Another wicket, a run out, in the 18th over, pegged the chasing team back, but stalemate continued until the final over with a steady stream of runs but no big hits. With 10 needed off the last six balls, the batsman were only able to hit balls to deep-set fielders. Akshay, the fast bowler who bowled the final over, was accurate in his full deliveries. In the desperation for a run, there was a run out when, in the fourth ball of the over, Joshi is struck on the pads, and the non-striker and striker are stranded at the same end. 110 is defended, the lowest score to be defended in this season’s KPL. Not Out: Joshi 33 (23), Mishra 0 (0)

Live Cricket Score Bellary Tuskers 87/4 | 17 overs: Bellary Tuskers have made heavy weather of the smallish-looking total. The quick wickets lost earlier in the innings compelled batsmen to be safe and pragmatic. A six and a four, off the first and the last balls of the 16th over respectively. Although the 17th over was devoid of big hits, the equation of 24 from 18 is doable. Batting: Joshi 25 (15), Devraj 27 (40)

Live Cricket Score Bellary Tuskers 30/3 | 8 overs; BATTING: Amit Verma 4 (14), Devraj Patil 9 (16): Chasing just 111 to win, no one would have expected Bellary Tuskers to struggle so badly. But, now eight overs in the innings it looks certain that defeat awaits them. The Hubli bowlers have done a good job in using the unusual bounce of the pitch and the Tuskers have failed to play them successfully. Bellary need a big partnership here. OUT! Pavan Deshpande 1 (6) b Kamath, OUT! Bharat Chipli 2 (4) c Bhille b Akshay, OUT! CA Karthik 11 (8) c Bhille b Akshay

Live Cricket Score Hubli Tigers 110/9 | 20 overs; BATTING: Shivil Kaushik 15 (17), Prateek Jain 4 (3): After struggles aplenty Hubli have managed to play out 20 overs, but the score obtained looks far from threatening. For a victory, Bellary will have to score at just over 5.5 RPO. Overall, quite a shabby effort by Hubli with the top score coming from Kunal Kapoor but with 26 off 24 balls, doesn’t quite classify as a captain’s knock. Hubli will have to bowl really well to have a chance.

Live Cricket Score Hubli Tigers 74/6 | 14 overs; BATTING: Chethan William 9 (8): Things have worsened for the Hubli Tigers in the last couple of overs. They lost D Negi in the first ball of the 12th over and Nitin Bhille fell without adding a run to Hubli’s cause. Kranthi Kumar struggled during his stay at the crease and when trying to free arms mistimed the ball and was caught in a splendid effort at long off. Chethan William has to dig in and bat till the end. OUT! Kranthi Kumar 4 (11) c Aiyappa b Karthik

Live Cricket Score Hubli Tigers 62/3 | 11 overs; BATTING: Dikshanshu Negi 8 (8), Chethan William 2 (3): Things are not going ideally for the Hubli Tigers. Their run rate was lagging behind the six mark and in attempt to push it up a little bit, two more wickets have fallen. Kunal Kapoor fell for 26 in a caught and bowled attempt by Prasanna Patil, while KB Pawan was stumped of Amit Verma’s bowling for 24. Hubli Tigers need a nice counter-attacking innings now.

Live Cricket Score Hubli Tigers 35/1 | 6 overs; BATTING: KB Pawan 19 (18), Kunal Kapoor 15 (12): After the early wicket of Mohammad Talha, the Hubli Tigers are playing cautiously scoring at less than six runs per over after completion of the power-play period. Kunal Kapoor is looking quite comfortable though and will look to accelerate soon. 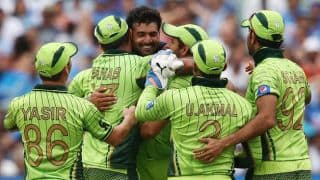