Catch all the updates from the Mangalore United vs Namma Shivamogga game here.

Welcome to CricketCountry’s coverage of Karnataka Premier League (KPL) 2015. Today, the final day of the group round, will have Mangalore United taking on Namma Shivamogga, who are placed in the seventh and sixth places respectively in the points table, and later in the day, Mysuru Warriors will play Rock Stars, who have not won a single game in the competition. The top four teams at the end of today will move into the knockout rounds to play the eliminator. Namma Shivamogga are placed higher than Mangalore United in the table due to a difference in net run-rate Both have a realistic chance of moving into the next round. Who will emerge on top? Catch all the live updates here. Karnataka Premier League (KPL) 2015 Points Table

Live Cricket Score Mangalore United 141/7 | Overs 20 (Target 138): Wickets in the middle pegged the chasing team, Mangalore United, back, and it seemed they were handing the initiative to Namma Shivamogga. But BN Bharath and R More not only stalled the opposition momentum, but played smartly and cashed in on the 19th over. With 14 needed off 12 deliveries, More hit a six, and Bharath a four, to help get the scores level. A four off the first ball of the final over got Mangalore the win. Not Out: BN Bharath 12 (10), R More 12 (10)

Live Cricket Score Mangalore United 39/1 | Overs 5 (Target 138): The Mangalore United openers have galloped to a quick start, helped by attack from Rohan Kadam. His partner, Rohit, is more sedate. But Rohan’s innings came to an end with a tumbling catch by Stuart Binny at long-on, after backpedalling to get under the ball. Batting: Rohit Sabharwal 8 (13), KC Avinash 0 (0)

Live Cricket Score Namma Shivamogga 137/9 | Overs 20: The base Binny had seemed to lay threatened to fall apart in the 18th over, as Dinesh Borwankar was caught in the deep, and Binny was caught behind when he tried to guide a ball to third man. However, Siddharth and Aditya Sagar hit two sixes in the penultimate over to lift the run-rate. The first ball of the final over was wasted as five wides, before Siddharth departed, caught impressively at fine leg. Aditya Sagar followed next ball, gloving a short ball to the keeper. Gulecha deposited the fourth ball for a one-bounce four straight down the ground. A run out, and a nice fou through backward point had Shivamogga finishing at 137. Not Out: Bhavesh Gulecha 9 (3), Sinan 0 (0)

Live Cricket Score Namma Shivamogga 59/3 | Overs 11: The jittery top order for Shivamogga has provided a slow start. Six fours have been hit in the innings so far, and three wickets, including a run out, have been effected by their disciplined opponents. Stuart Binny, Shivamogga’s captain, looks stable at the crease. Batting: Gopal 7 (9), Binny 19 (17) 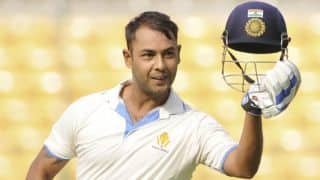