Karnataka look to dismiss ROI and get a healthy 1st innings lead.

(Will Karnataka turn out to be dominant and thrash Rest Of India or will they taste defeat?)

Meanwhile, South Africa have thrashed Sri Lanka by nine wickets and are the first team to make it to the semi-final of the ICC Cricket World Cup 2015. Read the match report of Sri Lanka vs South Africa by Shiamak Unwalla here

Stumps! Karnataka will be happy with their performance but will be a touch disappointed with the fact that they conceded a tiny lead. They have 10 wickets in hand going into Day 3 and have taken a slender lead of 19 runs.

Karnataka have managed to take the lead without losing any wicket. They’ll want to add as many runs as possible before the end of the day. ROI need to pick up a few quick wickets.

Karnataka openers Mayank Agarwal and Ravikumar Samarth have walked out to bat and look to wipe a small deficit of 20 runs. TOI have managed to take a vital first innings. Karnataka will now have to take a huge lead and win the match in the fourth innings.

That’s it, all over at Bangalore! ROI have been bowled out and they have taken a lead of 20 runs. Sreenath Aravind gets his first wicket of the match as he cleans up Varun Aaron for  25.

OUT! Shardul Thakur is dismissed for 17 after he tries to charge Shreyas Gopal and goes for a big shot. he misses everything and the ball crashes into the stumps. Pragyan Ojha is the last man in for ROI as they take a first innings lead.

We’re underway at Bangalore once again in the final session of play. ROI still have some catching up to do. Their first priority however will be to get a first innings lead.

OUT! Rishi Dhawan is out after a brilliant catch by HS Sharath at square leg. Abhimanyu Mithun bangs the ball ins short and Dhawan goes for the pull, but top edges it and Sharath takes the catch inches from the ground. After a referral, it is confirmed that he took the catch cleanly. After new batsman Shardul Thakur takes a single, Kedar Jhadav is out bowled by Mithun for 78. DOUBLE STRIKE FOR KARNATAKA! Tea break at Bangalore now, with ROI still trailing Karnataka by 25 runs with two wickets in hand.

200 up for ROI! They now trail Karnataka by 42 runs with four wickets in hand. Kedar Jhadav is doing an excellent job and will hope that someone at the other hands hangs around with him.

Kedar Jhadav scores his half-century. He has played well so far as ROI look to wipe the deficit. and Jayant Yadav is also been dismissed after he put on a solid partnership with Jhadav. Wicket just at the right time for Karnataka and it’s provided by Shreyas Gopal.

Kedar Jhadav and Jayant Yadav have put on 50 for the sixth wicket. They have added some sort of stability to the innings, yet they still trail Karnataka by  87 runs, with 5 wickets in hand. Jhadav is approaching a well deserved half-century.

Play has resumed at Bangalore after the lunch break with Kedar Jhadav and Jayant Yadav looking to guide their team to a safe position. Karnataka will be looking for a couple of early wickets.

Lunch being taken at Bangalore with ROI still trailing Karnataka by 117 runs, with 5 wickets in hand. Match evenly poised at the moment. ROI need a partnership now and Karnataka need a couple of wickets post lunch to feel that they are in control.

OUT! Skipper Manoj Tiwary is out for just 14. Vinay Kumar strikes again as he traps Tiwary for just 14. ROI have lost half their side, having just crossed the 100-run mark.  Jayant Yadav is the new batsman.

OUT! Naman Ojha is dismissed for 34, caught in the slip cordon off the bowling of Abhimanyu Mithun. Ojha got a start and was looking good to go on and get a big one. Kedhar Jhadav is the new batsman.

OUT! Paras Dogra is trapped in front as Shreyas Gopal strikes off his very first delivery. A decent partnership was building, but it’s unfortunately cut short. Skipper Manoj Tiwary is the new batsman.

50 up for ROI as Paras Dogra and Naman Ojha try to ressurect the innings. Karnataka will look to pick up a couple of wickets to get on top.

OUT! Vinay Kumar strikes as he removes Jiwanjot Singh for 17, caught behind. Vinay gets his second wicket of the game. Naman Ojha is the new batsman for ROI.

We’re underway in Bangalore as Rest Of India resume the day. Abhimanyu Mithun starts proceedings for Karnataka. ROI’s first target should target should be wipe off the deficit. Match evenly poised at the moment.

Rest of India resume (ROI) Day 2 at 20 for one against Karnataka, after Karnataka were bowled out for 244. Karun Nair, Mayank Agarwal and Abhishek Reddy scored half centuries for Karnataka and Varun Aaron took six wickets for ROI to dismiss Karnataka to a moderate score. ROI however lost only one wicket in their pursuit to knock a score of 224 down after Unmukt Chand was bowled by Vinay Kumar off the very first ball of the innings. READ: Varun Aaron’s five-for gives Rest of India the advantage against Karnataka in Irani Trophy

Karnataka won the Ranji Trophy after they beat Tamil Nadu comprehensively in the final at Mumbai.Manoj Tiway is the captain of ROI and he will look to lead his team to a victory against a dominant Karnataka side. The players will play their part in the eighth edition of the Indian Premier League (IPL), which will start from April 8. 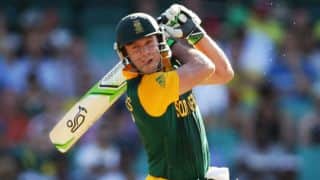 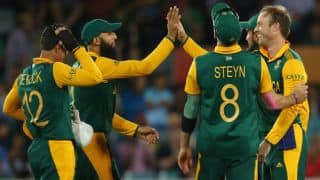