Karnataka close in on yet another win over Rest of India.

That’s it it’s all over at Bangalore. Karnataka win by 246 runs after ROI are bowled out for 156. Pragyan Ojha is the last man out for ROI. Karnataka have now won two consecutive Irani Cups, only the second team after Mumbai to do so.  Shreyas Gopal gets four wickets, Abhimanyu Mithun three wickets with HS Sharath and Sreenath Aravind picking up a wicket apiece.

Shardul Thakur strikes again as he removes Kedar Jhadav and Shardul Thakur. Jhadav scored yet another half-century and was the only one in the team to offer some resistance.

Karnataka pick up two quick wickets and are now just three wickets away from victory. Jayant Yadav and Rishi Dhawan were dismissed by spinner Shreyas Gopal.

Karnataka are very much on top at this stage, but Kedar Jhadav is looking aggressive smashing a couple of boundaries and a six in the last over before tea. Karnataka will be confident of knocking off the remaining wickets in the post-tea session.

ROI lose two wickets in quick succession with Jiwanjot Singh and Manoj Tiwary dismissed. Jiwanjot and Tiwary got off to a start but could not continue it. Karnataka are now just five wickets away from win.

Post lunch ROI have managed to bat slowly but steadily building the innings. Jiwanjot Singh and skipper Manoj Tiwary will hope to bat till the end of the day. READ: Manish Pandey, Varun Aaron break records during Irani Cup 2014-15 match at Bangalore

At Lunch, Karnataka are well on top at this moment. They are just seven wickets away from victory. Skipper Manoj Tiwary is looking aggressive and is supported by Jiwanjot Singh at the other end.

OUT! Abhimanyu Mithun strikes once again. He’s caught behind for a duck. Mithun is on fire as he gets his third wicket in his second over, Karnataka well on top at the moment.

OUT! Abhimanyu Mithun strikes in his very first over. He removes Unmukt Chand for just one caught behind. Mithun strikes again as he removes Paras Dogra for a duck. This is the start Karnataka would have wanted when they set a target of 403 earlier.

Karnataka have been bowled out and ROI need 403 to win the match. Keep in mind that ROI did secure a slender first innings lead and a draw will win them the match. Shardul Thakur picks up all four wickets to fall today and ends the innings with a fifer.

OUT! Sreenath Aravind is dismissed LBW off the bowling of Shardul Thakur. Thakur has picked up all the three wickets to fall today. Manish Pandey is still batting well on a century. ROI need 403

100 for Manish Pandey after exploding suddenly. Vinay Kumar and Abhimanyu Mithun are dismissed. Shardul Thakur gets both the wickets, but with Pandey at the crease, Karnataka have a good chance to extend their lead even more.

Karnataka going about it at a slow pace at the moment. They already have a healthy lead, but must accelerate to get a huge one. They have two set batsmen at the crease.

We’re underway in Bangalore with Manish Pandey and Vinay Kumar at the crease. The duo have already put on 50-plus for the 7th wicket and look set to pile on more misery on Rest of India (ROI). ROI need a few quick wickets to get back into the game.

Karnataka resume Day 4 of Irani Cup 2014-15 with a healthy lead of 321 with Manish Pandey batting with 73 and skipper Vinay Kumar batting on 28. Rest of India (ROI) must try to restrict Karnataka to as less runs as possible as they try to chase down a score, which is already looking impossible to chase down. Karnataka will want to pile on the misery on ROI and score as many runs as possible. READ: Karnataka batsmen help gain massive lead against ROI on Day 3 of Irani Cup

Plenty of time still left in this match. If ROI manage to bowl Karnataka out in the first session, they will feel that they can chase down whatever the target as, with five sessions to go. ROI had taken a slender first innings lead and will hope to cash in on the advantage. Karnataka had crushed ROI even last year after the former won the Ranji Trophy. READ: Abhimanyu Mithun’s exclusive interview with CricketCountry’s Sudatta Mukherjee

Karnataka won the Ranji Trophy after they beat Tamil Nadu comprehensively in the final at Mumbai.Manoj Tiway is the captain of ROI and he will look to lead his team to a victory against a dominant Karnataka side. The players will play their part in the eighth edition of the Indian Premier League (IPL), which will start from April 8. READ: Varun Aaron’s five-for gives Rest of India the advantage against Karnataka in Irani Trophy 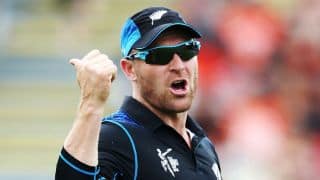