Catch the Live Updates of the 1st ODI between New Zealand and South Africa here.

By Sameer Jha and Devarchit Varma

(South Africa will look to continue their good form in ODIs in New Zealand’s home conditions. Catch the Live Scores and Updates from the match here)

So South Africa completed a clinical performance with the bat after bowling New Zealand out for a paltry total. Luke Ronchi’s excellent 99 helped boost the Kiwis to a reasonable total, but it was never going to be enough to cause serious concern for the Proteas. In case you missed the action, you can read Devarchit Varma’s match report here.

.@ABdeVilliers17 – a class above the rest! Always love watching him bat. #NZvSA

I’m enjoying the battle between Dan Vettori and AB Devilliers. Not many times in Int cricket a coach would be bowling to his player #RCB

South Africa 122/4 | Overs 31
AB de Villiers 23 (34), JP Duminy 12 (20)
AB de Villiers and JP Duminy have taken South Africa past the 100-run mark. They now need another 107 runs to win from as many as 19 overs. Certainly not a big ask, but if they lose wickets then it is likely to get tough.
South Africa 97/4 | Overs 25.1
AB de Villiers 10 (17)
BIG WICKET! Kyle Mills has cleaned up Hashim Amla, who was looking set at the crease! Big blow for the tourists and the hosts are now sniffing an opportunity here. JP Duminy is the new man in.
OUT! H Amla b Mills Hashim Amla 38 (74)
South Africa 92/3 | Overs 23
Hashim Amla 35 (68), AB de Villiers 8 (12)
South African captain AB de Villiers has now joined Amla at the crease. South Africa need a strong partnership in the middle as they can accelerate towards the later part of the match, once having knocked off lot of runs form the target.
South Africa 73/3 | Overs 18.1
Hashim Amla 25 (51)
And just when things had started to look right for South Africa, Corey Anderson strikes and removes Rilee Russouw. The South African batsman is caught at long slip and they lose their third wicket.
OUT! Rilee Rossouw c Brownlie b C Anderson 26 (31)
South Africa 58/2 | Overs 14
Hashim Amla 19 (38) , Rilee Rossouw 18 (19)
South Africa need Amla to drop the anchor. They are not chasing a mammoth total, and a strong 100-150 run stand will put them right on top. On the other hand, New Zealand need to sustain pressure as they can only win this clash by taking wickets.
South Africa 45/2 | Overs 10
Hashim Amla 14 (25) , Rilee Rossouw 10 (8)
Another one bites the dust! Du Plessis, who has been in mindblowing form is gone! Boult does the damage again. He’ll be a player to watch out for in the upcoming ICC World Cup 2015. South Africa in just a little bit of trouble here. But, they bat deep and the total isn’t imposing.
OUT! du Plessis c Ronchi b Boult 8(23)
South Africa 30/1 | Overs 7
Hashim Amla 11 (20) , Faf du Plessis 8 (18)
Both batsman have cautiously piled on the runs after the early dismissal of de Kock. They know that if they see these overs from Boult and Mills, they can quietly collect the runs in the middle overs, and reach 231. New Zealand need to take wickets, and they need to do it soon.
South Africa 14/1 | Overs 3
Hashim Amla 4 (6) , Faf du Plessis 1 (7)
Trent Boult makes the first breakthrough for New Zealand! de Kock played well in the first over, hit two boundaries, but he has to walk back. The hosts need to pick a few more wickets, to make the total of 230 seem big. Faf du Plessis, who has as calm a head on his shoulders, walks in to bat.
OUT! de Kock c Latham b Boult 9 (5)
New Zealand 230 | Overs 45.1
Trent Boult 21 (33)
Tragic! Luke Ronchi has been dismissed on 99. He had been cautious and turned down a double in the previous over when he was on 98, but that decision has come back to haunt him. Still a fabulous 10th wicket partnership, that has thrown just a little bit of life back into this match.
OUT! Ronchi c de Kock b Steyn 99(83)

A bit of #NZvSA #Statchat for you: this is the @BLACKCAPS‘ highest 10th wicket partnership v. South Africa & their highest ever in NZ.

New Zealand 207/9 | Overs 43
Luke Ronchi 78 (74), Trent Boult 20 (29)
What a superb 10th wicket partnership this has been. Full of audacious shots that have come off. Even though, South Africa would still fancy themselves to win, the partnership just goes to show what one can do when they are not bogged by pressure, and play freely.
New Zealand 169/9 | Overs 37
Luke Ronchi 54 (58), Trent Boult 6 (9)
This is some brain dead batting from the Kiwis. They should at least look to bat out the 50 overs, but Kyle Mills has played a big shot. Luke Ronchi gets to his half-century. Superb knock from him in adverse circumstances!
OUT! Kyle Mills c Philander b McLaren 1(6)
New Zealand 148/8 | Overs 33
Luke Ronchi 40 (47), Kyle Mills 0 (2)
What a catch! De Kock jumps to his left and takes an absolute screamer! Nathan McCullum has to go. South Africa seem to be doing everything right today. Their tour to New Zealand has begun on a great note, and they have well and truly announced themselves as serious contenders for the ICC World Cup 2015.
OUT! Nathan McCullum c de Kock b McLaren 6 (16)
New Zealand 139/7 | Overs 29
Luke Ronchi 36 (35), Nathan McCullum 4 (6)
Oh dear! Tom Latham departs. He comes down the track, in an attempt to dispatch JP Duminy, but Quinton de Kock makes no mistake in effecting a stumping. Daniel Vettori’s return to international cricket starts on a sour note, as he is caught LBW in just the second delivery.
OUT! Latham st de Kock b Duminy 29(38)/ OUT! Vettori lbw b Tahir 0(2)
New Zealand 124/5 | Overs 25
Luke Ronchi 33 (28), Tom Latham 22 (29)
This has been a superb fighting partnership for the Kiwis. 56 runs from 55 balls. Both batsman looking comfortable now. McLaren has had a bad day, as he was hit for 3 fours by Latham in the 22nd over, and then again hit for 3 fours by Ronch in the 24th over.
New Zealand 84/5 | Overs 20
Luke Ronchi 13 (15), Tom Latham 3 (12)
Luke Ronchi is leading much of the recovery here for the Kiwis. He’ll need to play a long innings for New Zealand to get to any sort of respectable total here. Tom Latham, on the other hand, is looking uncomfortable just like the earlier Kiwi batsman who departed.
New Zealand 68/5 | Overs 16
Luke Ronchi 0 (1), Tom Latham 2 (4)
Both McCullum and Latham were forming a steady partnership, but Imran Tahir produces a beauty of a delivery that catches the outside edge of Dean Brownlie. McCullum follows him, and falls in the next over to Morne Morkel. Corey Anderson walks in and is bowled first ball. New Zealand look in deep trouble here.
OUT! Brownlie c de Kock b Tahir 24(28)/ OUT! B McCullum c Tahir b M Morkel 16(21)/ OUT! Corey Anderson b M Morkel 0(1)
New Zealand 35/2 | Overs 10
Dean Brownlie 0 (3), Martin Guptill 2 (18)
South Africa strike again! This time it’s Guptill who has to depart. He was really struggling to get going. South Africa have made a superb start to their New Zealand tour.
OUT! Guptill c de Kock b Philander 5 (29)
New Zealand 21/1 | Overs 6
Dean Brownlie 0 (3), Martin Guptill 2 (18)
Neesham was looking in good touch here. He dispatches Steyn for two back-to-back boundaries but falls to Vernon Philander in the next over. The ball catches the outside edge off his bat, and goes straight into the hands of Quinton de Kock.
OUT! Neesham c de Kock b Philander 16 (15)
New Zealand 11/0 | Overs 4
James Neesham 8 (9), Martin Guptill 1 (15)
Kiwis have made a slow and cautious start to their innings. Just a run off the first two overs. Martin Guptill is the slower of the two, and he manages to score just a run from his first 15 deliveries. Neesham, on the other hand, is playing free-flowing cricket and looking to attack. Not much for the bowlers so far in this match.

South Africa have won the toss, and elected to field first.

Hello and welcome to CricketCountry’s coverage of the first One-Day International (ODI) between New Zealand and South Africa at Mount Maunganui. Both teams will look at the three-match ODI series as ideal preparation for the upcoming ICC World Cup 2015.

New Zealand can draw inspiration from their past record against South Africa at home, having beaten the Proteas 16 times and half as many. New Zealand is known to be tough opponents in their backyard, having beaten India 4-0 in the last ODI series that was played here. The Kiwis also boast of a number of players who are specialists when it comes to limited-overs cricket, such as skipper Brendon McCullum, Corey Anderson, Trent Boult, Tim Southee, Ross Taylor, and a few more. They will also field the highly-experienced Daniel Vettori on Tuesday, providing for some interesting contest between Vettori and players such as Hashim Amla, who is known to be a good player of spin, on tracks that do not have much to offer for spinners. 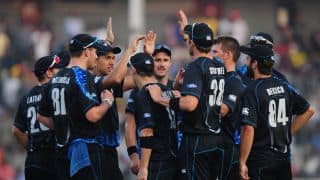 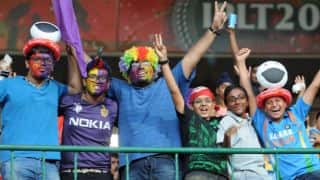