Welcome to CricketCountry’s live coverage of second of the three-match Twenty20 International (T20I) between Pakistan and England at the Dubai Sports Complex.

By Ayush Gupta and Rishad DSouza

Hello folks! Welcome to CricketCountry’s live coverage of second of the three-match Twenty20 International (T20I) between Pakistan and England at the Dubai Sports Complex. I am Ayush Gupta along with Rishad D’souza, and we will be with you to bring updates and scores of the match. England, who won the the opening tie last night at this very same venue by 14 runs are running high on confidence, especially after a 3-1 series win in the just concluded ODI series against the hosts. They would definitely look to take forward the confidence and the winning momentum in this tie as well, and make sure that they seal the series with another emphatic win. LIVE CRICKET SCORECARD: Pakistan vs England 2015, 2nd T20I at Dubai

LIVE CRICKET SCORE: PAK 169/8 in 20 Overs. Anwar Ali 3(4), Sohail Tanvir 6(3): An absolute thriller which sees England defend the score by just three runs. The only reason it came this close was due to a fantastic blitz by Afridi smashing 24 off eight deliveries. Pakistan needed just 11 off the final over but the task became incredibly difficult when Sarfraz Ahmed was dismissed off the first ball by Woakes. OUT! Sarfraz Ahmed 19(13) b Woakes

LIVE CRICKET SCORE: PAK 148/7 in 18 Overs. Sarfraz Ahmed 7(7): Afridi was threatening to take the game away with a trademark blitz and smashed 3 sixes of that 18th over by Woakes but got out of the final delivery much to England’s relief. Pakistan still have a strong chance though. OUT! Shahid Afridi 24(8) c Plunkett b Woakes

LIVE CRICKET SCORE: PAK 126/6 in 17 Overs. Sarfraz Ahmed 7(7), Shahid Afridi 5(2): Liam Plunkett gives another example of his guile getting rid of Malik with a slower off cutter. Pakistan don’t have much of a chance in this game now. Afridi is on the crease though. OUT! Shoaib Malik 26(21) c Billings b Plunkett

LIVE CRICKET SCORE: PAK 110/5 in 15 Overs. Shoaib Malik 21(16), Sarfraz Ahmed 1(2): Liam Plunkett gets lucky, slides one down leg to Akmal who fails to get the glide to fine leg, ball brushes his thigh pad and Buttler takes a good diving catch, umpire thinks he has nicked it and rules Akmal out. OUT! Umar Akmal 3(5) c Buttler b Plunkett

LIVE CRICKET SCORE: PAK 93/3 in 12 Overs. Shoaib Malik 1(3), Sohaib Maqsood 2(3): The Pakistan batsmen are getting in the bad habit of throwing away starts, Hafeez falls for a 20-ball 25. But credit to Plunkett, varied his pace a bit and drew Hafeez into the shot early to get the leading edge. Pakistan in deep trouble. OUT! Mohammad Hafeez 25(20) c Willey b Plunkett

LIVE CRICKET SCORE: PAK 62/2 in 9 Overs. Mohammad Hafeez 4(10), Shoaib Malik 1(3): And another wicket in the stumping mode of dismissal. Adil Rashid does the trick with a straighter one. Rafatullah Mohamand was trying to up the attack but missed the big hit. England are right back in this contest. Shoaib Malik is the new man in, Pakistan need a big knock from him. OUT! Rafatullah Mohmand 23(24) st Buttler b Rashid

LIVE CRICKET SCORE: PAK 51/1 in 5 Overs. Rafatullah Mohmand 17 (13): Stephen Parry has produced the all important breakthrough for England getting rid of the dangerous Ahmed Shehzad. He again used the slowed one with some flight to lure the batsman down the track, beat him, and Buttler stumped him. OUT! Ahmed Shehzad 28(18) st Buttler b Parry

LIVE CRICKET SCORE: PAK 45/0 in 4 Overs. Ahmed Shehzad 27 (15), Rafatullah Mohmand 12 (9) — What a start by the Pakistan openers as they seem to taking apart the England bowlers smashing them all over the park. If this continues long, Pakistan are surely to win this in no time. England desperately need a breakthrough here.

LIVE CRICKET SCORE: ENG 172/8 in 20 Overs; BATTING: Chris Woakes 15 (7), Adil Rashid 3 (2) — THAT’S IT!!!! England have set a target of 173 runs for Pakistan to level terms here. Splendid knock from James Vince and Jos Buttler were enough to do so, while Afridi gave them a tough time.

Buttler (33) out getting a thin edge on a reverse-ramp through to the keeper. Eng 151-6: https://t.co/Xa1hb4BmN8 pic.twitter.com/lhijdHnyGx

Vince out for 38 from 24 balls, Afridi’s third wicket. England 109-4 after 14. https://t.co/BGbOrRW7pZ #PAKvENG pic.twitter.com/HdEOxnYskH

LIVE CRICKET SCORE: ENG 109/4 in 14 Overs; BATTING: Jos Buttler 8 (11), Sam Billings 0 (0) — GONE!!!! James Vince goes for 2o as he is caught by Anwar Ali off Shahid Afridi again as he also becomes the highest wickettaker in T20Is for Pakistan, overtaking Saeed Ajmal. Sam Billings is the new man in.

You can’t keep Afridi out the action as he catches Root (20) at midwicket. Eng 78-3 after 11 https://t.co/Alekjvmz9H pic.twitter.com/y2wAsJHCNu

Roy (29) is next out, Afridi’s second wicket, caught behind. Eng 48-2 after seven. https://t.co/GgxuHKj82H #PAKvENG pic.twitter.com/q9hj4tJois

LIVE CRICKET SCORE: ENG 58/2 in 8 Overs; BATTING: James Vince 8 (9), Joe Root 9 (6) — GONE!!!! It’s JAson Roy, who falld for 29 after being cheekily caught behind by Sarfaraz Ahmed, and it’s Afridi again who delivers another breakthrough. Joe Root is the new man in.

LIVE CRICKET SCORE: ENG 36/1 in 5 Overs; BATTING: Jason Roy 20 (14), James Vince 4 (5) — GONE!!!! Alex Hales has been dismissed for mere 11 as he has been trapped leg-before by the skipper, Shahid Afridi off the very first delivery of his over. James Vince is the new man in.

LIVE CRICKET SCORE: ENG 32/0 in 4 Overs; BATTING: Alex Hales 11 (10), Jason Roy 20 (14) — Steady start by both the openers as Jason Roy seems to be in good touch, having smashed a couple of huge sixes already and is looking to score more of those big ones quite often.

The England huddle in an already boisterous Dubai. Victory tonight and it’s five limited-overs wins in a row #comeon pic.twitter.com/Sj82y3tOQy

England, who are in a great form in the limited overs format, have been tearing apart the Paksitan team in almost every department on field, be it with the bat, bowl or in fielding. The resulted splendid performance following the Test series loss has boosted enough confidence in the English side to tame them at their home venue and are well on course to emerge victorious in this tie. However, Pakistan should not be written off as they well have the ammunition to strike back and could well be favourites to square the series, especially being the hosts and having the crowd support on their side. Pakistan vs England 2015, 2nd T20I at Dubai, Preview 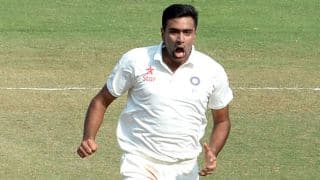