Hello and welcome to CricketCountry's live cricket updates of Day 2 of the third and final Test between West Indies and Pakistan at Roseau.

Hello and welcome to CricketCountry’s live cricket updates of Day 2 of the third and final Test between West Indies and Pakistan at Roseau. I, Pramod Ananth, will bring all the live cricket scores and interesting tweets from the contest. Come to think of it, I am fortunate enough to cover Misbah-ul-Haq and Younis Khan’s last-ever international assignment. However, on the opening day, rain played spoilsport as we witnessed only 69 overs being bowled. After being invited to bat, Pakistan ended day’s play at 169 for 2, thanks to Azhar Ali and Babar Azam’s half-centuries. All the same, Azhar is unbeaten on 85 and will eye his second century of the series. FULL CRICKET SCORECARD: Pakistan vs West Indies 2017, 3rd Test at  Windsor Park, Roseau, Dominica

Playing in his last Test, Younis was given a guard of honour by West Indies. Younis shook hands with West Indies captain Jason Holder and thanked the rest of the team for such respectful gesture. West Indies, however, were unable to dismiss Younis who scored 10 off 44 before the umpire called it stumps.

Earlier in the series, Younis became the first player from Pakistan to score 10,000 runs. Overall, he became the 13th player to achieve the feat. Interestingly, Younis needs another 67 runs to go past former Indian cricketer Sunil Gavaskar’s career tally of 10,122 runs.

With Misbah-ul-Haq still to bat, we may as well see another guard of honour.

For West Indies, Alzarri Joseph and Roston Chase took a wicket apiece. Shannon Gabriel, hero of the last match, ended with figures of 19-6-32-0. It was Azhar’s masterful batting that kept West Indies at bay. He took as many as 219 deliveries and hit 7 fours and 2 sixes to lace his attractive 85. The highest run-scorer for Pakistan in 2016, Azhar will look to emulate the same this year as well. 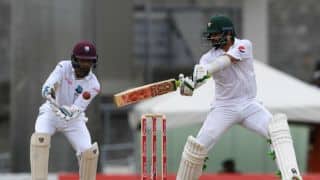