Catch all the live cricket scores and updates of Punjab vs Gujarat, Ranji Trophy 2015-16, Group B match, Day 1.

Hello and welcome to the live blog of the first day of the Ranji Trophy 2015-16 Group B match between Punjab and Gujarat at IS Bindra Cricket Stadium in Mohali on Thursday. Punjab have played two matches so far and have seven points from them having won and lost one match each. Gujarat on the other hand have played only one match which they were able to draw, they have just one point. People may be thinking that Punjab may have an edge in this game since they had convincingly won one of their previous two matches of the tournament. However, what needs to be understood here is that the first match that they won was against a weak team— Railways. They lost their next match against Mumbai which is considered a very good Ranji team. Yuvraj Singh’s loss of form is trouble for Punjab. But even Gujarat did not play to their expectations in their last game. Good thing for Gujarat is that Parthiv Patel is in form. Punjab fans will be hoping that Yuvraj regains his touch. They would also like their bowlers to bowl in right areas and not lose their rhythm like they did in their last match played against Mumbai. Read all Ranji Trophy 2015-16 team previews here

Live cricket scores Gujarat 235/3  | Overs 68| Batting: Parthiv Patel 19(43) ,Y Venugopal Rao 10(7): Gujarat lose their third wicket PK Panchal who scored a briliant 105. Panchal struck 15 sweetly timed boundaries in his innings. Gujarat have reached 235 for the loss of three wickets. Parthiv Patel and Venugopal Rao are on the crease. They are batting on 19 and 10 runs respectively.

Live cricket scores Gujarat 176/2  | Overs 56| Batting: Parthiv Patel 0(2) , PK Panchal 82(170): Yuvraj Singh tries his hand at bowling and picks the wicket of BH Merai. Parthiv Patel has come to the crease now. PK Panchal is well set to make his hundred. Gujarat needs one more good partnership like they had between SB Gohil and PK Panchal.

Live cricket scores Gujarat 143/1  | Overs 45| Batting: BH Merai 8(13) , PK Panchal 71(145): Finally, Punjab have succeeded to break the first-wicket partnership. SB Gohil was unlucky since he got run out after a well played 54. BH Merai has come at the crease after his departure. He has scored eight runs so far, PK Panchal is batting on 71. There have been 10 extras in the innings till now. Punjab will have to take two more quick wickets to get back in the match.

Live cricket scores Gujarat 109/0  | Overs 37| Batting:  SB Gohil 50(105), PK Panchal 49(121):  Gohil has reached his fifty, he hit seven fours en route to his half century. PK Panchal on the other end is just one short of his fifty. Gujarat are looking solid at this moment. Punjab need to strike first blood quickly or else Gujarat might fly away with this game in no time. Currently, both the openers will be looking to make their hundreds too and if this happens Punjab will find it very difficult to come back in the match.

Live cricket scores Gujarat 92/0  | Overs 32| Batting:  SB Gohil 43(96), PK Panchal 39(101):  Gujarat’s openers are batting exceedingly well. Both are nearing their fifties. Also, they are batting at a decent strike rate. Gohil has struck six while Panchal has hit seven boundaries in their respective knocks so far. Gujarat are just eight short of reaching their hundred. Parthiv Patel is next to come and the openers have made life easy for the coming batters.

Live cricket scores Gujarat 42/0  | Overs 12.3| Batting:  SB Gohil 14(37), PK Panchal 22(39): Gujarat, who were asked by Punjab to bat first are batting pretty well. SB Gohil and PK Panchal are on the crease and their partnership has reached 42. Panchal in particular is playing fast, he has hit four boundaries so far. The batters should strive to take this partnership post 100 to put pressure on Punjab bowlers.

Toss: Punjab, who chose to field 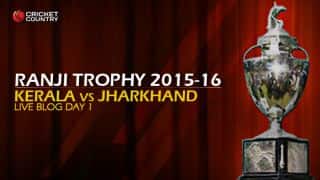