Hello and welcome to our live coverage of Day 4 of the first Test between Sri Lanka and New Zealand at Galle on Saturday.

New Zealand lead by 177 runs at the moment and they would be eager to add as many more runs as possible. They would hope Watling could bat till the end and the others just stay there with him. Sri Lanka on the other hand, need to get the last three wickets quickly as the lead the Kiwis have now, is already going to be a tricky total to chase. Also, if Sri Lanka chase the target given to them, it is going to be the highest chase on this ground. They will have to bat really well to do so but for now, the remaining three wickets is their issue. Day 4 will probably give us a very nice idea to which way this game is going. Do join us 0945 local (0415 GMT). Till then, take care and goodbye!

First it was Latham and Nicholls who steadied the ship with a 50-run stand but then both were dismissed in quick succession. Sri Lanka were still on top at that time but then, the stand which probably could prove to be the game-changing one, the partnership between Southee and Watling which accounted for 54 took the Kiwis to safer shores. The former was dismissed but then Somerville hung in there with Watling who is surpassed his half ton.

End of another excellent day of cricket. Still, it is difficult to decide on which way this game is heading too. However, it is New Zealand who will be happier side at the moment but it was Sri Lanka who dominated majority of the day. The Lankans started by adding handy runs with the bat early on and taking a lead of 18. They then got rid of the top order quickly. Embuldeniya was the tormentor-in-chief. It seemed like they would run through the Kiwi batting line-up but that was not to be. 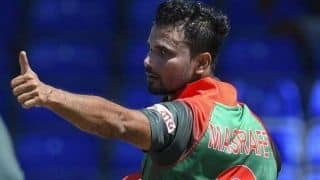