Catch live updates of the Ranji Trophy 2015-16 encounter between Vidarbha and Assam on Day 3 here.

Hello and welcome to CricketCountry’s live coverage of Day 3 of the Group A game of the 2015-16 Ranji Trophy between Vidarbha and Assam, live from Jamtha, Nagpur. Assam recovered well after being bowled out for a mere 206 for Day One. They struck back, dismissing Vidarbha for 154, acquiring a 52-run lead. They were 36 for 2 by stumps, but when captain Gokul Sharma will resume batting with Amit Verma on Day Three, they will start with a lead of 88 — a substantial number for a low-scoring match. However, Vidarbha will bank on their star bowler Umesh Yadav, who had taken 4 for 49 in the first innings. READ: Ranji Trophy 2015-16, full coverage here

Live cricket scores Vidarbha 88/0 | Target 213| Overs 31| Batting: FY Fazal 38(111), Wasim Jaffer 43(75): Vidarbha have started their last innings exceedingly well. Assam bowlers are struggling to take the first wicket. They have tried five bowlers without any success. FY Fazal and Wasim Jaffer are batting well in tandem and dealing mostly in singles right now. At stumps on day three, Vidarbha were batting on 88 with all 10 wickets in hand and needed just 125 runs to win.

Live cricket scores Vidarbha 55/0 | Target 213| Overs 19| Batting: FY Fazal 25(63), Wasim Jaffer 24(50): Vidarbha have reached 55 and they haven’t lost any wicket till now, they are going strong. They now need 158 runs to win with all wickets intact. Both the batters are looking forward to complete their fifties.

Live cricket scores Vidarbha 24/0 | Target 213| Overs 7| Batting: FY Fazal 6(23), Wasim Jaffer 12(19): Vidarbha batters will have to show resilience and come out stronger in this innings. Vidarbha’s openers— FY Fazal and Wasim Jaffer have the responsibility to give Vidarbha a good start. Jaffer made a fine 40 in the first innings and would be looking to carry forward his batting momentum in this innings as well.

Live cricket scores Assam 206 & 160| Vidarbha 154| Overs 81.3| Batting: Arup Das 0(20): Assam lose their last two wickets for 13 runs and with it are bowled out for a paltry 160 in their second innings. Sarvate and Wakhare took six and four wickets respectively. Vidarbha will now need 213 runs to win in their second innings. It is not going to be easy since their batters are not in good touch, they were bowled out for just 154 in the first innings. OUT! Kunal Saikia c Shanware b Wakhare 3(24), Krishna Das c Shanware b Wakhare 9(13)

Live cricket scores Assam 206 & 107/6| Vidarbha 154| Overs 53| Batting: Tarjinder Singh 12(49), Sarupam Purkayastha 9(13): Assam are losing wickets in a heap. AA Sarvate has bowled exceedingly well and has brought Vidarbha back in the match, he has four scalps to his name in this innings till now. Batters of both the teams haven’t played well in this match. Assam now lead by 159 runs. OUT! Arun Kathick c Wasim Jaffer b AA Sarvate 2(5), Amit Verma c Fazal b Wakhare 28(130)

Vidarbha resumed their innings on 1 without loss, and lost Faiz Fazal almost immediately. Wasim Jaffer (40 in 93 balls, 3 fours) and Ganesh Satish (67 in 159 balls, 3 fours) then dug in, adding a crucial 59. At 80 for 1 Vidarbha seemed to be on track before off-spinner Swarupam Purakayastha and leg-spinner Amit Verma, bowling in tandem, reduced Vidarbha to 101 for 6. Aditya Sarwate gave Satish company, helping him add 40, but once he fell the floodgates opened: the last 4 wickets fell within a span of 13 runs, and Vidarbha conceded a first-innings lead of 52. Purakayastha (4 for 47) and Verma (3 for 24) were the wreckers-in-chief.

Umesh went wicketless in the hour before stumps, but Sarwate removed openers Pallav Das and Rishav Das with his left-arm spin, and finished the day with 5-2-3-2. 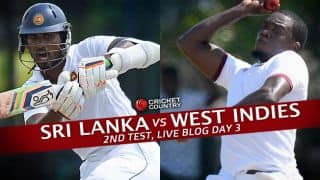