Hello and welcome to CricketCountry’s live cricket blog of the Vijay Hazare Trophy 2015-16 tournament, between Gujarat and Jharkhand at Alur. Jharkhand welcomed MS Dhoni back into their side for the first time in seven years. But he could not play a major part as he was dismissed for just nine. Dhoni will look to play a much better role in this match. His skipper Varun Aaron too had a disappointing match as he conceded 56 runs in is 10 overs without picking up a wicket. Gujarat, on the other hand will be playing their first game of the tournament and will be looking to get off to the best possible start.

LIVE CRICKET SCORE: Gujrat 121/3 in overs 26 | Target 178 | BATTING: Priyank Panchal 60(69), Rujul Bhatt 0(1): Gujarat are just a few runs away from their victory as they have managed not to lose many wickets. Jharkhand bowlers failed to do what they were expected to. As the score is low, some early wickets would have made an impact.

LIVE CRICKET SCORE: Jharkhand 177/7 in overs 50; BATTING: Varun Aaron 9(10), Shahbaz Nadeem 17(18): Gujarat bowlers troubled the Jharkhand batsmen enough to restrict them within 180. That will make the job for the batsmen easy. MS Dhoni scored 44 off 64 which was the maximum.

LIVE CRICKET SCORE: Jharkhand 60/1 in overs 20 ; BATTING: Ishank Jaggi 34(57), Anand Singh 8(21): Gujarat need a few more wickets while Jharkhand is on their way to establish a strong partnership. Jharkhand is taking their time to settle down which is good but they need to score as well.

Gujarat have already crashed out of the Ranji Trophy and winning the Vijay Hazare Trophy will be an extra motivation for them. Jharkhand, on the other hand, played incredibly well and have as a result made it to the quarter-final stage of the tournament. Gujarat will be led by Parthiv Patel, who is one of their most experienced campaigners. He will look to guide guide his team to a win and get off to the best start possible.

Jharkhand on the other hand will want to make it two wins in a row. If they do so, they would give themselves an excellent chance of making it through to the knockout stages. Gujarat will look to stop a Jharkhand side currently high on confidence after beating Jammu & Kashmir (J&K) in their first match of the series. Jharkhand managed to defend a low score against J&K, but will have to put up a better display with the bat against Gujarat. 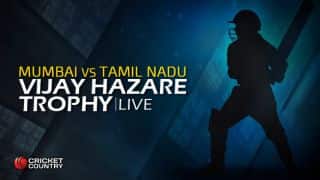