Afghanistan take on Zimbabwe in the fourth of the five-match One-Day International (ODI) series at the Sharjah.

Hosts Afghanistan take on visitors Zimbabwe in the fourth of the five-match One-Day International (ODI) series at the Sharjah Cricket Association Stadium on Monday. Afghanistan, who lead the series 2-1, lost the chance to seal the series 3-0 in the previous tie as they lost miserbaly to Zimbabwe by 117 runs in a low-scoring tie, and would aim to boune back and win it all here. However, Zimbabwe, who still trail the series, would look for another elusive win here and level terms in the series, as they aim to keep themselves alive in the series and play the decider at this very venue a couple of days later. LIVE CRICKET SCORECARD: Afghanistan vs Zimbabwe 2015-16, 4th ODI at Sharjah

Considering the performance in the previous tie, Zimbabwe again did not have a healthy outing with the bat, as it was only Hamilton Masakadza and Graeme Cremer’s all-important knocks of 83 and 58, respectively, that helped Zimbabwe reach a below par, yet match-winning total of 175 as the other batsmen failed to fire and were mostly dismissed for single digits, with Richmond Mutumbani being the third guy getting out in double digits (14). LIVE CRICKET UPDATES: Afghanistan vs Zimbabwe 2015-16, 4th ODI at Sharjah

Afghanistan, performed miserably with the bat, following an impressive show in the previous contests, they were bundled for mere 58, with opening batsman Mohammad Shahzad being the only batsman with a double figure of 31. It was indeed a disastrous show with the bat for the Afghans which  was not at all expected, and a turnaround can be round the corner in this tie. Afghanistan vs Zimbabwe 2015-16, 4th ODI at Sharjah, Preview 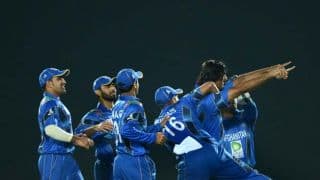