England will resume their fading innings, at 107 for 8, needing 175 more runs to avoid follow-on.

Australia will likely face a choice to enforce follow-on on England, when battle resumes between the two countries on the third day of the final Ashes Test at The Oval. At 107 for 8, the home side is 175 runs behind in avoiding the follow-on target of 282, after Australia finished their first innings at 481 in the second session on Day Two. The first English wicket fell on the stroke of lunch, a peach that got Alastair Cook bowled for 22, and the other opener Adam Lyth fell soon after resumption. Ian Bell, bowled off an excellent delivery from Peter Siddle, was out when England had scored 60, and from then on, the steady procession of wickets all but evaporated their hopes of mounting a 4-1 series win. LIVE CRICKET SCORECARD: England vs Australia, 5th Test, The Oval, Day 3

They could have been bowled out sooner, however, had Mitchell Marsh not overstepped. Mark Wood was caught in the slips, but a confirmation from the third umpire on the front foot showed Marsh s huge no-ball. The wicket would have had England struggling at 92 for 9, and Marsh would have taken his fourth wicket. LIVE CRICKET UPDATES: England vs Australia, 5th Test, The Oval, Day 3

A similar incident happened in Australia s innings as well. Steven Smith was on 92 when he chased a wide delivery from Ben Stokes and edged to the wicketkeeper. But he was called back as replays showed Stokes had overstepped by a long way. Smith went on to make 143 before dragging Steven Finn on to his stumps. He added 91 in quick time with Mitchell Starc, who scored 58 off 52 balls. Backed by a gritty performance from the top order on the first day, this saw Australia through to a challenging total. 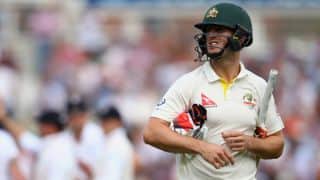