India have never lost to Pakistan in the previous five World Cup encounters.

Arch rivals India take on Pakistan in a Pool B encounter at Adelaide in what is expected to be a thrilling match. This is the first match for both the teams in the teams in the ICC Cricket World Cup 2015. MS Dhoni, who led his team to a win in the previous edition of the World Cup, will again lead his side his side in this edition of the mega event. Pakistan will be led by Misbah-ul-Haq. India vs Pakistan Live Score

India have the upper hand going into this contest as they have beaten Pakistan in all five previous encounters in World Cups. Pakistan will hope that they can reverse their fortunes and get Pakistan off the mark against India in World Cup ties. The last time the two teams faced each other in World Cups was in the ICC Cricket World Cup 2011 at the semi-final stage. There has been a lot of hype surrounding this game and neither team will want to lose the match. India vs Pakistan: Statistical Preview

Pakistan have won both their warm-up games, first against Bangladesh and then against England. India on the other hand have just beaten minnows Afghanistan. It is set to be an interesting contest and one can only hope that it lives up to it’s hype. India are the stronger team on paper but Pakistan will be no pushovers either. Both teams have injury concerns of their own and will hope that all they key players are fit ahead of huge clash. India vs Pakistan: Preview 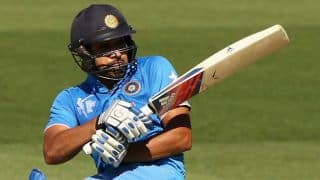