GOOD START – Abhimanyu Easwaran and Priyank Panchal are making their second chance count. From overnight score of 17/0, India A have now reached 46/0. Easawaran is batting on 15, while Panchal is on 29.

Hello and welcome to our live coverage of day four of the 2nd unofficial Test between India A and South Africa A at the Srikantadatta Narasimha Raja Wadeyar Ground, Mysore on Friday.

Skipper Aiden Markram and allrounder Wiaan Mulder scored hundreds before South Africa A were bowled out for 400 on the third day of the second unofficial Test against India A Srikantadatta Narasimha Raja Wadeyar Ground, in Mysore on Thursday.

South Africa A resumed play on the overnight score of 159/5, with Markram, 24, was batting on 83. The right-hander added 78 runs more to his account before being dismissed for 161, hitting 20 fours and two sixes in his 253-ball stay in the middle.

While Markram was the top scorer for the visitors, Mulder provided solid support to his skipper. Mulder, who came out to bat at number seven, scored an unbeaten 131 off 230 balls, hit 17 fours and a six as he and Markram added 155 runs for the sixth wicket and denied India A a chance to secure a big first-innings lead.

For India A, the spin-bowling duo of Kuldeep Yadav and Shahbaz Nadeem shared seven wickets between themselves. While the former scalped four wickets, conceding 121 runs in his 29 overs, the latter picked up three wickets in 31.3 overs, giving away 76 runs. 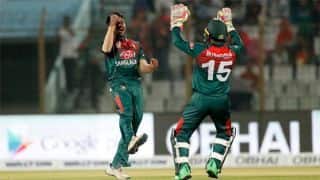