The live streaming of the Hong Kong T20 Blitz will be shown on the official YouTube channel of Hong Kong Cricket.

The Hong Kong T20 Blitz gets underway after much anticipation. The tournament commences from March 8 with the final being played on March 12. The tournament will feature as many as 5 teams, who will vouch for the coveted trophy. Day 1 will see two matches take place, first game will see the Galaxy Gladiators Lantau take on Hung Hom JD Jaguars, while the second match will have City Kaitak and Kowloon Cantons face each other. The live streaming of this match and other games will take be shown live on the official YouTube channel of Hong Kong Cricket. This is only the second edition of HK T20 Blitz.

Organised by Tim Cutler, who is Cricket Hong Kong s CEO, takes inspiration from rugby s Hong Kong Sevens, whose success helped the sport return to the Olympics last year. Look at the Hong Kong Sevens, Cutler told AFP. Hong Kong is not known for its sporting prowess but it can run international events. It s an easy place to get things done. Outside, people are thinking, How can we be part of that? Legends Kumar Sangakkara, Tillakaratne Dilshan, Shahid Afridi, Darren Sammy and Misbah Ul-Haq were the first big names signed in January, but they ve since been joined by the likes of Samuel Badree, Ian Bell, Chris Jordan and Marlon Samuels.

In the first T20 Blitz 2016, City Forex was the title sponsor of the winning team. The City Group team behind the City Kaitak franchise represents a group of people with extremely diverse backgrounds, brought together with a solid bond of friendship and trust. 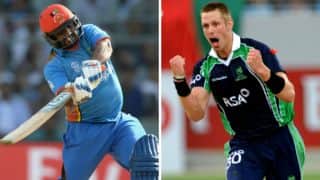