The BCCI is a bit embarrassed as it is no position to sign the Memorandum of Understanding (MoU) with the visiting England team.

There are similarities between Delhi Chief Minister Arvind Kejriwal and the Board of Control for Cricket in India (BCCI) President Anurag Thakur, though both belong to different political parties fighting each other in Delhi and elsewhere. Kejriwal spends his time accusing Prime Minister Narendra Modi and the Centre of not allowing him to function while Thakur says the Supreme Court appointed Justice Rajendra Mal Lodha Committee is asking him to run cricket after tying both his hands behind his back. Both Modi and the Supreme Court are unmoved and Justice Lodha tells the Board that it is only carrying out the apex court’s instructions. The BCCI tried to tell the court and Justice Lodha that all cricket activity can come to a standstill, including visits of overseas teams and domestic tournaments. It didn’t work: Chief Justice Tirath Singh Thakur wouldn’t take any veiled threats and told the Board “season or no season” it has to fall in line. FULL CRICKET SCORECARD: India vs England, 1st Test at Rajkot

Domestic cricket is going on and the New Zealanders have gone back after their tour and now England are here getting ready for the first Test at the new Rajkot Test centre next week. Yet, not a day passes without sniping from either side.

It is not easy to cancel a tour unless the Board or the visitng team decides to do so and for that you need strong reasons. The West Indies called off its India tour midway over a pay dispute. Here the players have no such issue and not many active or former cricketers have come out openly to criticise the BCCI for the way it is running the game.

It’s hilarious to find the way the Lodha Committee and the Board are fighting through “sources close to” them leaking statements. And both complain about the language used by the other in their public spats. Threats apart, any flare-up can still cause disruption of England’s Test and One-Day series, leading to unimaginable damage to the game itself.

For all queries raised by the Board, the answer from the Lodha Committee is a simple line: The committee cannot give any direction until and unless an undertaking is given that the Board would adopt the reforms in full as recommended by the Lodha panel and validated by the Supreme Court. The BCCI is a bit embarrassed as it is no position to sign the Memorandum of Understanding (MoU) with the visiting England team before the series gets underway. The MoU pertains to team’s various allowances, including accommodation, travel and security.

The Board secretary has written to the ECB, the English board, of its inability to sign the MoU as it needed clearance from the Lodha Committee. The committee, however, rejected the Board’s claim saying that the MoU is a bilateral agreement not within the panel’s purview. As for any payments, the Board has to furnish details for clearance.

The two also have differing opinions on the Indian Premier League (IPL) television rights. When the Board approached the committee, it shot back to say that “neither identification nor appointment of vendors or contractors is the task or function of the committee. The committee is only required to fix a threshold value and approve awards of contracts above it”.

The Board is supposed to have met the committee to sort out the issues and inform it that it would fully comply with the reforms by Thursday, November 3, but it has not done so. The Board will have to give the undertaking to the court by Saturday. It continues to harp on reservations about certain recommendations which it says have to be approved by the respective state associations and some of them need a three-fourths majority to get through. All payments to the association have also been stopped by the court till they comply with the recommendations.

Both the Lodha Committee and the Board should come down from their avowed stands to break the impasse. The committee should allow the Board to decide on issues it knows the best about and insist on transparency in the administration. All that needs to be done is to call for the audited accounts of the state associations and get them scrutinised by the Comptroller and Auditor General of India, which the Board in any case has accepted, leaving the number of selectors and one state one vote for the Board to decide on.

Yes, the issue of the age limit must be insisted on and as for the cap on term of office it should ask the Board to follow its old rule that no president will have more than one term of three years and the secretary of five years without getting into a cooling-off period before another term. 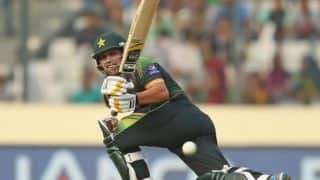