The Judge in the Chris Cairns perjury trial had issues warning about being careful in regards to the evidence pertaining to Lou Vincent.

London: The judge in the perjury trial of former New Zealand captain Chris Cairns warned a jury on Friday to be “particularly cautious” regarding the evidence of self-confessed match-fixer Lou Vincent. Cairns and co-defendant Andrew Fitch-Holland, a barrister, face perjury and perverting the course of justice charges after the all-rounder successfully sued Indian Premier League founder Lalit Modi for accusing him of match-fixing on Twitter in 2010. Both Cairns and Fitch-Holland deny the charges against them. In 2012, Cairns won the libel action and was awarded £90,000 ($136,795) in damages, with Modi having to pay out £1.4 million ($2.1 million) in damages and costs. ALSO READ: Lou Vincent admits Daryl Tuffey threatened to kill Chris Cairns after not being paid

But the prosecution in the ongoing case at London’s Southwark Crown Court have alleged that Cairns lied during the libel hearing when he said he had “never, ever” engaged in match-fixing. Several former and active cricketers including Australia great Ricky Ponting and current New Zealand captain Brendon McCullum have testified during the now six-week long trial. The jury has also heard evidence from former New Zealand batsman Vincent, who said Cairns had promised to pay him money if he deliberately played badly while they were playing for the Chandigarh Lions in the Indian Cricket League in 2008. ALSO READ: Chris Cairns’s defence closes case at perjury trail

Judge Nigel Sweeney, summing up, gave detailed instructions to the Southwark jury as to how they should assess the evidence of Vincent, who admitted to match-fixing in 2013 and was given a life ban from cricket last year by the International Cricket Council. “The prosecution say that nevertheless you can be sure he is telling the truth when he tells us that Mr Cairns recruited him to take part in cheating,” said the judge.

He added: “It is incumbent on me to emphasise to you the potential danger posed by such a witness and point out to you that he might have his own interests to serve by giving evidence. What you make of his evidence is entirely a matter for you, whether you are sure that he’s telling the truth or not.”  ALSO READ: Chris Cairns eanred £250,000 and above for match-fixing

Judge Sweeney’s warning was important in the context of a perjury case, a criminal offence for which those found guilty can be sent to prison. Under English law, the evidence of more than one witness is required to prove a charge of perjury. Jurors were told by Judge Sweeney they had to be sure of the evidence of at least two of the three main prosecution witnesses — Vincent, Vincent’s ex-wife Ellie Riley and McCullum — if they were to convict Cairns. ALSO READ: Brendon McCullum: Chris Cairns approached me for match-fixing

The judge added that if the jury were sure Cairns had engaged in fixing, they could convict him on the first count of perjury and then go on to consider the second count against both defendants of perverting the course of justice. If, however, they acquitted on the first count, then they must acquit on the second as well, he said.

Judge Sweeney will continue his summing up on Monday. 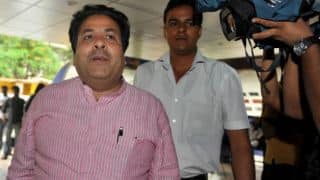 Rajeev Shukla: India will play Pakistan in Lahore if it is made a safer venue