Sunil Gavaskar on Monday expressed his sadness at the demise of former Test opener Madhav Apte.

Former Indian captain Sunil Gavaskar on Monday expressed his sadness at the demise of former Test opener Madhav Apte, who passed away here earlier in the day at the age of 86.

Gavaskar hailed Apte as a “true aficionado” of the sport and said he would miss the “enlightening cricket talk” they used to have at the latter’s home.

“Extremely sad at the passing away of Shri Madhavrao Apte,” Gavaskar told IANS. “He was a true aficionado of our beloved game and just couldn’t have enough of it.”

“The cricketing get-togethers at his house made for memorable evenings with enlightening cricket talk with the who’s who of cricket. I will miss those evenings, listening to him along with some of the greatest names in Indian cricket.”

He continued to be a dominant force in first-class cricket playing for Mumbai both as a batsman and captain, remaining as interested and drawn towards the game till the end. He finished with 67 first-class games with 3,336 runs at an average of 38.79 that included six centuries and sixteen half centuries.

Post retirement, he donned the hat of president of the Cricket Club of India (CCI) in Mumbai and was instrumental in bringing in a 14-year-old Tendulkar into the CCI side then. 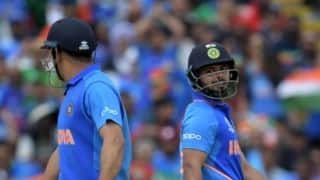