Apte started his career as a leg-spinner, and shot to fame after taking 10 for 10 in an innings in Giles Shield

Apte played seven Tests for India in a span of five months – making his debut against Pakistan in 1952 – and scored a hundred and 3 fifties, all in West Indies; he averaged 49.27, and was never picked again. He is also the only known cricketer to have played alongside DB Deodhar and Sachin Tendulkar.

Apte started his career as a leg-spinner, and shot to fame after taking 10 for 10 in an innings in Giles Shield. However, he came under the tutelage of Vinoo Mankad, and made his Ranji Trophy debut once Vijay Merchant, no less, marked him out as his heir.

ALSO READ: The love and respect Madhav Apte commands was unmistakable at his book launch

Merchant played a crucial role in Apte’s career, convincing his parents (Apte hailed from an extremely affluent family) to send him to England in 1952 after the youngster was not picked. He made his Test debut that winter, against Pakistan, went to West Indies, and that was it.

Apte played Kanga League till he was 70. He was later instrumental in bending the CCI rules to make Tendulkar an underage playing member of the club. He was also named Sheriff of Mumbai.

His brother Arvind played a Test for India, while his son Vaman played squash for India (and cricket for Bombay University).

Even in his eighties Madhav Apte played badminton. In his autobiography As Luck Would Have It, Apte hinted at not-too-holy motives of Lala Amarnath, then Chairman of Selectors, for leaving him out of the Test side. 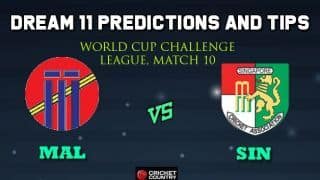 Miscommunication leads to confusion between Rishabh Pant, Shreyas Iyer for No.4 position