A series which he began with a century in the first Test, Rohit capped off with a double century as India whitewashed South Africa 3-0.

In his first series as Test opener, Rohit Sharma bagged the Player of the Series award for racking up over 529 runs. A series which he began with a century in the first Test, Rohit capped it off with a double century as India whitewashed South Africa 3-0, and although the win was the result of a collective team effort, former batsman VVS Laxman was glad to see Rohit being at the forefront of India’s victory march.

“Batting with the maturity that experience brings with it, Rohit showcased impeccable judgment in the first session when an inspired Kagiso Rabada was making the most of assistance from the surface. With the ball jagging around, Rohit left balls outside off repeatedly, refusing to play unless he needed to,” Laxman wrote in his column for Times of India on Wednesday.

“Because there was swing too, he desisted from driving even when the ball was full, relying more on strokes off the back foot to score. Not only did he come with a clear game plan, he also showed the discipline to stick to it, which to me was a huge tick in the box. Once he got his eye in and the pitch eased out a touch, he was back dotting the landscape with conventional free-flowing Rohit strokes. That he kicked on to score his maiden double-ton was further proof of his desire to not be satisfied easily.”

Laxman lauded middle-order batsman Ajinkya Rahane for being involved in a game-changing partnership with Rohit when India were struggling in the first inning. Batting first, the South Africa pacers had reduced India to 39 for 3 with Virat Kohli and Cheteshwar Pujara back cheaply.

But Rahane and Rohit shepherded a strong India comeback putting on 267 runs the highest fourth-wicket stand against South Africa by any team in Test matches. Along the way, Rahane scored his 11th Test century, which was his first in India in over three years.

“His partner in a match-sealing fourth-wicket stand was Ajinkya Rahane, who produced his most fluent Test knock in India. Rahane has always delivered when the chips are down, and it was no surprise to see him bring his A game when India were 39 for 3. His mindset and footwork against spin, which has troubled him in the past, was exemplary,” Laxman, who scored over 10000 runs for India, added.

Laxman was, in particular, pleased to see India’s pacers work up South Africa on a surface that didn’t have much for them. Umesh Yadav led the charge, combining for 10 wickets, whereas spinners R Ashwin, Ravindra Jadeja and debutant Shahbaz Nadeem had limited roles.

“Contrary to expectations, pace more than spin got the job done for the hosts after they amassed close to 500,” Laxman said. “It was terrific to watch Mohammed Shami and Umesh Yadav not just pick up wickets, but also in the manner in which they did so. The ball of the match was the one with which Umesh got Quinton de Kock in the first innings. De Kock plays the short deliveries well, but he had no answer to the snorter that took his glove after rearing up from a length.”

The Ranchi Test was special for Nadeem, who, 15-years after his First-Class debut, received his maiden India cap and finished with four wickets. His first wicket was a classical left-arm spinner’s dismissal to send back Temba Bavuma. Nadeem flighted the ball, deceived the batsman in pace and had him out stumped. On his home ground, Nadeem starred in India’s emphatic innings win and for Laxman, it was a reward for the 30-year-old’s long wait.

“I was delighted that Shahbaz Nadeem made his debut, just reward for years of unsung toil in First Class cricket. It was a bonus that the debut came at his home ground, and the fact that he looked entirely at home in Test cricket bears testimony to the depth and robustness of the Indian domestic structure,” Laxman said. 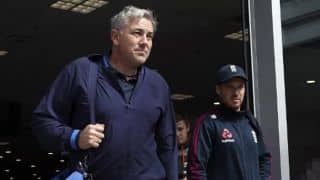 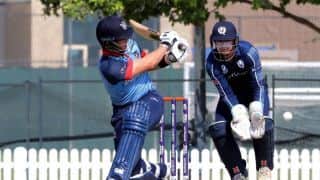