Zimbabwe’s head coach Makhaya Ntini got depressed after his team’s loss in the second ODI to an extent that he wanted to hang himself. The hosts had a horrible day on the field losing to visitors India by 8 wickets. After the loss, Ntini said, “I almost hanged myself, if there was a tomato tree outside I would have hanged myself in that tomato tree. It’s no good. We have experienced players with us who can easily read the game. We were in the perfect position.” Ntini recently lashed out at BCCI and Cricket South Africa (CSA) for not sending their best teams to visit Zimbabwe while their customary yearly tour.  FULL CRICKET SCORECARD: India vs Zimbabwe 2016, 2nd ODI at Harare

This statement surprised everyone as met MS Dhoni after the match and got a bat signed by Indian skipper. It is quite hard to anticipate that Ntini was going through a trauma of this intensity. He has recently taken up the job as Head coach of Zimbabwe after sacking former coach Dave Whatmore. ALSO READ: Makhaya Ntini’s Zimbabwe must focus on improvement rather than opponents

Zimbabwe lost the series after losing second ODI at Harare. They bundled up for 126, which was easily chased by the Indian batsmen. They have not been able to live up to the “unpredictable team” tag lately. They lost 24 out of 31 matches in the last year and have not made any significant process this year too. ALSO READ: MS Dhoni autographs bat for Makhaya Ntini

Ntini was recently backed by former South African all-rounder Lance Klusner to improve the qulity of cricket in Zimbabwe. This defeat calls for drastic changes in the domesitc structure of Zimbabwe if they are to compete with big teams like India and South Africa. 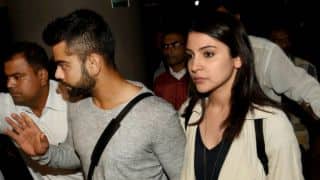