Maninder Singh believes Ravichandran Ashwin will be under pressure against England

Maninder Singh believes Ravichandran Ashwin will be under pressure against England

Ravichandran Ashwin who played his last Test against Afghanistan last month is most likely to get a chance in the playing XI.

India are all set to take on England in the five-match Test series starting from August 1. The limited-over series has witnessed some quality spin bowling from Kuldeep Yadav as the English batsmen failed to read him initially. There have been talks about giving chances to Yuzvendra Chahal and Kuldeep in Test so they can replicate the success in red-ball cricket as well. However, Chahal is not a part of the Test squad but is surely someone India will look forward to include in the Test squad soon.

The spin-duo has already replaced Ravichandran Ashwin and Ravindra Jadeja in limited-overs. Ashwin who played his last Test against Afghanistan last month is most likely to get a chance in the playing XI. According to a report in Hindustan Times, Maninder Singh believes Ashwin will be under pressure in the series.

I m waiting to see how he goes about in the series. When you are not playing regular cricket, it s not easy. He is a very balanced person, but no doubt he is under pressure with these two spinners (Kuldeep and Chahal) around. The captain has also put his faith in wrist spinners, which will add to the pressure.”

However, he also believes that Ashwin has the mental ability to perform well in overseas conditions. It is time to show character. But it s very dry in England and I m certain India will play two spinners. In that case, he is in. Instead of working on the skill you have been bowling all your life. But mentally people are different, and he thinks he can do it .

India are currently playing a practice match against Essex and have finished for 322 for 6 on the first day. 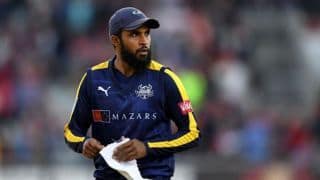