Harris, 26, looks set to make his Test debut as opening partner to Usman Khawaja who has been included in the squad.

The Victorian trio of captain Peter Handscomb, opener Marcus Harris and fast bowler Chris Tremain have been included in Australia s Test squad for the first two matches against India after successful performances on the domestic front, with the chairman of selectors Trevor Hohns backing them to have a big role in the upcoming series.

After four rounds of the ongoing 2018-19 Sheffield Shield, Harris is the second-highest run-getter with 437 at 87.40 which includes two sixties and an unbeaten 250 against New South Wales, while Tremain is the second leading wicket-taker with 24 at 20.45.

Marcus Harris has forced his way into the squad after an impressive start to the Sheffield Shield campaign for Victoria, and in recent times has performed in high pressure matches, including Sheffield Shield finals,” said Hohns. “Not only has he made plenty of runs, he s displayed the mental application we believe is required to compete at Test cricket.”

Chris Tremain has been performing consistently with the ball for Victoria,” said Hohns. “His form in the Sheffield Shield has seen him become the second highest-wicket taker in the competition this season. He has also been a consistent wicket-taker over the past two seasons, and thoroughly deserves his place in the squad.

Harris, 26, looks set to make his Test debut as opener at Adelaide Oval on December 6 as partner to Usman Khawaja who has been included in the squad. “We ve been really impressed with the way Usman Khawaja has applied himself through his rehabilitation and he s left no stone unturned in his bid to return in Adelaide,” said Hohns. “Barring any setbacks, all the signs are indicating he will be available for the first Test.

Handscomb, 27, captained Victoria to the JLT One-Day cup title in October, in the process scoring 361 runs in seven innings at an average of 51.57, with four half-centuries. He was named Player of the Match in the final against Queensland for scoring 49 off 45 balls and taking four catches behind the stumps while marshalling his players superbly in a 110-run win. Since the Sheffield Shield got underway, Handscomb has made 27, 48, 123, 2, 4 and 23.

Peter Handscomb has been recalled after missing out on the tour to the UAE. He s been one of Victoria s most consistent performers with the bat through the JLT Cup and Sheffield Shield. He s a well respected member of the dressing room, a calm head at the crease and has also played against India at Test level, said Hohns.

From the Test squad that went to the UAE to play Pakistan, those to be dropped are Matt Renshaw, Marnus Labuschagne, Michael Neser, Jon Holland and Brendan Doggett.

The players have had the opportunity to put their best case forward for selection through the JLT Cup and Sheffield Shield, but unfortunately haven t done enough to earn selection,” said Hohns. As I ve said in the past we know the quality of the players mentioned previously, and with a big summer program ahead opportunities may well present themselves for them, as well as others not included in this squad. 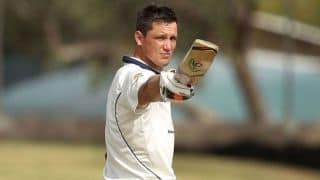