Pakistan women head coach Mark Coles on Thursday stepped down from his positing due to family responsibilities.

Pakistan women head coach Mark Coles on Thursday stepped down from his positing due to family responsibilities.

Coles’ contract was due to go on until the end of the upcoming ICC Women’s T20 World Cup in Australia. However, he will fly back to New Zealand and batting coach Iqbal Imam has been appointed as an interim coach.

“It is with a very heavy heart that I have decided to step down from my coaching role, something which I had enjoyed tremendously. However, at this time my family responsibilities are such that they need my undivided attention and focus,” Pakistan Cricket Board (PCB) quoted Coles as saying.

“I have been thinking about this for some time and taking into account Pakistan has some critical assignments in the next few months, I thought it was fair to the side I convey my decision to the Pakistan Cricket Board so that they have enough time to find a replacement,” he added.

PCB chief executive Wasim Khan thanked Coles for his contribution during his tenure.

“I am fully aware of Mark’s personal reasons and appreciate that despite pressing matters, he remained committed to Pakistan and the national women’s team. I would like to place on record our thanks to Mark for his contribution during his tenure,” Khan said. 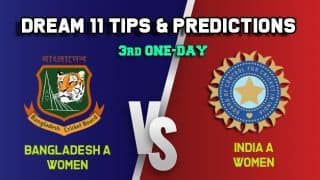 Game did not go according to plan in terms of bowling, says Keshav Maharaj