Hello and the welcome to our live coverage of Match 37 of ICC Cricket World Cup 2019 between Australia and New Zealand at Lord’s London on Saturday.

Australia are the only team confirmed for the semi-finals of the ICC Cricket World Cup. Perennial contenders New Zealand are a win away from joining them in the final four, having suffered their first loss of the tournament this week to perennial upstarts Pakistan in Birmingham. 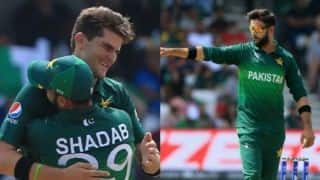