The second ODI match between Ireland and Pakistan at The Village, Dublin has been abandoned due to rain, without a ball bowled.

The second 50-over match between Ireland and Pakistan at The Village, Dublin has been abandoned due to rain, without a ball bowled. It rained persistently throughout the day, leaving the outfield wet. However, Pakistan beat Ireland in the first contest by 255 runs, their biggest in terms of runs. The 27-year-old opener Sharjeel Khan fired on all cylinders, scoring the fourth fastest century by a Pakistani batsmen. He plundered 152 runs off just 86 balls, including 16 fours and nine sixes. He was rightly adjudged Man of the Series for his staggering innings. With this, Pakistan win the two-match series 0-1, and will head to England for their next ODI assignment. FULL CRICKET SCORECARD: Pakistan vs Ireland,1st ODI at The Village, Malahide, Dublin

The in-form Pakistan will battle with the Englishmen yet again in a five-match series. After levelling the Test series 2-2, they must be brimming with confidence to take on Eoin Morgan’s men.

Pakistan, placed at No. 9 in the ICC ODI rankings, will be itching to beat England in their own den to move up the table. Led by the 31-year-old Azhar Ali, they have some swashbuckling limited-overs cricketers at their disposal. To add to the fire, with Mohammad Aamer back in the side, the pace attack looks ever more lethal. Also read: 1st ODI – Stats highlights

However, given England’s stellar performance in the shorter formats since ICC Cricket World Cup 2015 debacle, getting a better of them will be an uphill climb for the visitors. Whether Pakistan continue their Test form in shorter formats or they continue being at the bottom of the table, is a question only time can tell.

Man of the Series: Sharjeel Khan 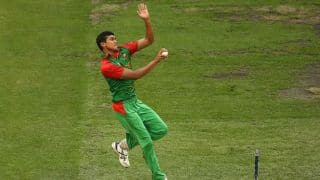