Henry, 26, has been at the forefront of Kent’s success this summer with 90 wickets.

Henry, 26, has been at the forefront of Kent’s success this summer with 90 wickets, of which 74 have come in 10 County Championship games at an average of 14.67 and strike-rate to help the club back into Division One. The remaining 16 came at 34 apiece in Kent’s one-day campaign.

New Zealand next play Tests in the UAE against Pakistan in November, followed by home series with Sri Lanka in December and Bangladesh in the new year. For Stead, who will also form part of the selection panel, Henry’s form for Kent was reason to be excited.

“Matt’s in great form at the moment. What we need to work out is where he fits across all three forms,” Stead told stuff.co.nz. “From my point of view I’m trying to work out what our 15 will look like at the World Cup so that might mean we give other players opportunities to find out if they’re the right players to fit into our 15. He [Henry] goes best when he’s been bowling a lot, and he’s getting the rewards now.”

Since he made his international debut in Dubai in 2014, Henry has played 35 ODIs, nine Tests and six T20Is. While New Zealand are likely to play the pair of Tim Southee and Trent Boult in the UAE and rely on spinners, Stead felt that the noise Henry was making in England was good for New Zealand’s depth.

“Matt’s always been a skillful bowler and if you look at the Black Caps right now one of their strengths is their pace bowling stocks. That’s a positive thing,” he said. “Sometimes you have to wait in the queue but he’s applying the right amounts of pressure to say ‘look at me, I’m still around and still in good form’.” 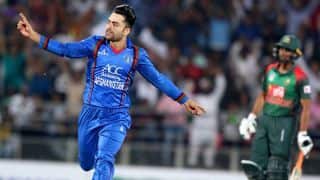