Mayank laced his knock with 11 boundaries and 2 sixes, and was involved in a 148-run partnership for the second wicket with Shubhman Gill.

Opener Mayank Agarwal smashed a breezy century as India A recorded a convincing seven-wicket victory over West Indies A in the Tri-Series here today. Chasing 222 in the allotted 50 overs, India A were home with plenty to spare at the Grace Road, with Mayank’s 102-ball 112 being the highlight of the innings.

India medium pacer Deepak Chahar  was the most successful bowler of the day, returning with impressive figures of 5/27 in his full quota of 10 overs. It was due to Chahar’s fine bowling that India A could cut short the West Indies A’s innings in 49.1 overs.

The 27-year-old Mayank laced his knock with 11 boundaries and 2 sixes, and was involved in a 148-run partnership for the second wicket with Shubhman Gill (58 not out off 92 balls). Once Mayank was dismissed in the 33rd over and Shreyas Iyer (1) also left cheaply, Gill and Rishabh Pant (18 not out) took India home, reaching the target in 38.1 overs.

Earlier batting first, West Indies A were bowled out for a modest 221 after losing wickets at regular intervals. Chahar was the wrecker-in-chief as he sent back two top-order batsmen with just 14 runs on the board.

A 72-run partnership for the third wicket followed between Chandrapal Hemraj (45) and skipper Jason Mohammed (31), but the opener was run out by Shubman Gill when he was just five runs away from a half century. Hemraj struck eight boundaries and a six during his 44-ball knock, even as Mohammed found the fence four times before Vijay Shankar had him caught behind in the innings’ 21st over.

However, it was because of wicketkeeper-batsman Devon Thomas’ effort that the West Indies A managed to cross 220 in the stipulated 50 overs. Thomas hit six boundaries and a six while facing 83 balls. Chahar then came back to wrap up the West Indies A innings with two quick wickets. 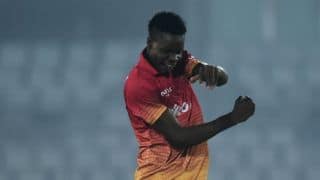