Finch has put RoW on course to victory.

Aaron Finch is leading Marylebone Cricket Club’s run-chase of 294 against the Rest of the World Xi at Lord’s. He has already reached his half century and is looking in great touch for a lot more. In 14 overs, MCC are 93 for no loss and Sachin Tendulkar is still out there in the middle.

Finch has been in great touch and has attacked from the word go. Even when Muttiah Muralitharan came on, he was severe against him and played some great strokes to put MCC on course. Earlier, there was a brief rain interruption, and they were away from the fielf. After returning, the MCC have taken the game by the scruff of the neck. 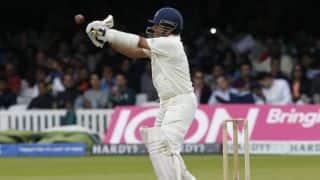