Aaron Finch has put MCC on course to victory.

Aaron Finch has smashed a brilliant ton for the Marylebone Cricket Club against the Rest of the World XI in their bicentenary game at Lord’s. Finch has been in great form and has attacked from the start to keep the RoW bowlers on the backfoot. In 29.1 overs, MCC are 170 for one and are chasing 294 for victory. It took Finch 96 balls to get to his ton.

Earlier, Sachin Tendulkar lit up the stage with a strokeful 44. He dazzled with some fantastic shots and was ultimately bowled by Muttiah Muralitharan, only to get Brian Lara to the crease. Unfortunately, Shane Warne wasn’t available to bowl as he broke his hand during the RoW innings. However, to watch Tendulkar was a glorious sight and that typical straight drive was on show again. 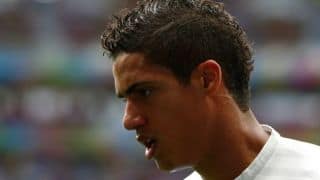