Karan Gilhotra is the alleged bookie that Anurag Thakur met.

Earlier, ICC chief executive Dave Richardson wrote to BCCI chief Jagmohan  Dalmiya, “During the 2014 edition of the IPL, unverified information was received by the ICC ACSU that Mr Gilhotra was seen trying to befriend players and support staff during the tournament and that there were rumours (again unverified) about his involvement in betting on cricket.”

The letter further added that BCCI’s Anti-Corruption Unite director Ravi Savani “wrote to all IPL franchise managers in 2014 advising them that they should take steps to ensure that Mr Gilhotra was not entertained by any of their squad members”, according to Indian Express. Read: BCCI unlikely to act on Anurag Thakur-bookie issue

The obvious question arises: who is Gilhotra? Hailing from Fazilka, a small village in Punjab and the son of state council Shiromani Akali Dal (SAD) member, Gilhotra made it to the Limca Book of records for becoming the youngest sarpanch (village head). Read: Anurag Thakur asks N Srinivasan to share list of bookies with his family members as well

He later settled down in Chandigarh, and is often spotted with industrialists and Bollywood stars. He hosted a Celebrity Cricket League (CCL) match in the city where actors Sunil Shetty, Sohail Khan and Bobby Deol played. He is also the promoter of the CCL team Punjab de Sher. Read: Anurag Thakur can’t be booked for alleged links with bookie without proper evidence, says Rajiv Shukla

According to Indian Express, Gilhotra caught attention after the IPL 2013 spot-fixing controversy saw S Sreesanth meeting a girl at a five-star hotel in Chandigarh. Ex-CBI office and part of the current ICC ACU team, Niranjan Virk has been tracking the Chandigarh businessman over the years. When contacted, Virk said, “I am not authorised to speak to the media. I would like to stay away from any controversial comments.”

ICC later informed BCCI of Thakur not keeping good company as the secretary was seen having a birthday cake with Gilhotra. Read: N Srinivasan to respond to Anurag Thakur’s letter personally

Speaking on the issue, Gilhotra said, “I am not aware that I was on ICC anti-corruption body’s watch list. I am a businessman. I have known Anurag and many others like him, including politicians, judges, Bollywood actors and bureaucrats, for the last many years. Being seen with them or knowing them; if that is interpreted as me doing something wrong, what can I say? If there is a database which ICC has created in which my name figures, why haven’t they called me for any sort of questioning or investigation? There is infighting among BCCI members and they are victimising me and my friends like Anurag.” 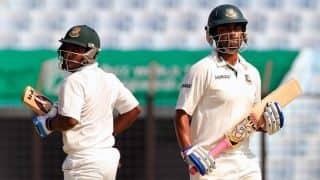