Mehedi Hasan shined with the ball claiming figures of 2 for 43 in Bangladesh's 90-run win over Sri Lanka in the 1st ODI at Dambulla.

Bangladesh continued their ascendency on the Sri Lanka tour after success in the Test arena. With only one win over their opponents in the past in Sri Lanka, Bangladesh recorded an empathic 90-run victory over Sri Lanka in the first One-Day International (ODI) at Dambulla. Mashrafe Mortaza, Mustafizur Rahman and Mehedi Hasan dented the hosts hope by picking wickets at regular intervals. In his debut 50-over game, Mehedi, shined with the ball claiming figures of 2 for 43. It was only Dinesh Chandimal, who struck his heart out for the home side, which crumbled under the pressure of chasing 325 runs. FULL CRICKET SCORECARD: Sri Lanka vs Bangladesh, 1st ODI

Mortaza drew first-blood in the form of Danushka Gunathilaka, who got out for 0. Gunathilaka trying to play across the line, missed the ball and got wrapped on pads. The ball came just enough to clip the stumps. New man Kusal Mendis, too failed with the bat, perishing for a 17-ball 4. Playing his first ODI, Mehedi, deceived him with a slower ball, which Kusal mistimed and handed a simple catch to the substitute fielder at deep mid-wicket.

Sri Lanka s most experienced player, Chandimal, came out in the middle looking for runs. Upul Tharanga s insecure innings came to an end on 19. Taskin Ahmed in his first over, beat Tharanga for pace; the ball managed to find the splice of the bat and went straight into the hands of the square-leg fielder. Sri Lanka s star from the Australia T20I tour Asela Gunaratne came out in the middle, with hopes a revival. He along with Chandimal, somewhat recuses a captain-less ship getting Sri Lanka past 50 run mark.

Mustafizur Rahman was finally called into bowl, in the 19th over that saw as many as three plays and misses. The pair steadily added 50 runs in 59 balls, with Chandimal doing most of the scoring. In what could be said a brainfade moment, Asela attempted a reverse sweep against Shakib and perishes; 40-ball 24. Coming into the side after a longtime, Milinda Siriwardana joined Chandimal in the middle. Chandimal meanwhile progressed to his 21st ODI half-century in 62 balls.

Chandimal became Mehedi s second ODI victim after a slog sweep went wrong. He managed to only lob the ball into the fielders hand for a 70-ball 59.

Sachith Pathirana came out in the middle, and started hitting the bowlers to all ends much to cheer of a gloomy audience in the stands. Pathirana along with Siriwardana managed to snitch up a 32-run stand for the sixth wicket. Siriwardana trying to emulate his six off the earlier ball, handed a skier to Shuvagata Hom at deep mid-wicket off Mustafizur.

Pathirana followed his partner soon in the dressing room, giving an easy catch at cover for 31; Mortaza’s second wicket.

Thisara Perera, who got thrashed all around the park, added some lusty blows across his name. Perera was prepared to dish out similar treatment to the visiting side with some huge sixes off his bat. Suranga Lakmal, who too chanced his arms alongside Perera, fell for 8 runs to Mustafizur. Perera, soon rocketed his way to a well-earned half-century in 28 balls; his fifth overall and first against Sri Lanka. This is also the fastest fifty for a Sri Lankan batsmen against Bangladesh.

Lakshan Sandakan gave hit wicket thanks to a mix-up between himself and Perera for 3. Perera, cameo finally came to an end after the handed Mustafizur his third wicket making 55 off 35 balls. Mustafizur ended with figures of 3 for 56, while Mehedi and Mortaza grabbed two apiece.

Earlier, in the day, Tamim Iqbal, Sabbir Rahman and Shakib Al Hasan build big partnership amidst personal milestones that saw Bangladesh end up with 324 runs on the board. While Tamim scored his eighth ODI ton, Sabbir and Shakib notched up their fourth and 33rd ODI fifties respectively. It was only Lakmal who kept some sanity to the bowling card with 2 for 45 beside his name. India vs Australia 4th Test: Without Virat Kohli, others have to step up, says Sourav Ganguly 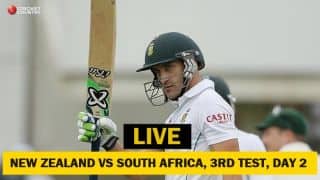