Clarke was missing in action in the opening two games for Australia.

Michael Clarke, who missed Australia’s opening two games in the triangular series, due to a hamstring injury will make a return against Zimbabwe in the fourth ODI. Nathan Lyon, who will be expected to exploit the spin-friendly conditions of Harare, will also make it to the starting XI. Clarke will replace Steven Smith, whereas Nathan Lyon will come in place of Mitchell Johnson.

“He [Steven Smith] hasn’t had much of an opportunity in this series batting at six and seven, but he was picked in the [tournament’s] first squad as well so he’ll obviously be very disappointed. But I got back in the team and someone had to go.”, Clarke was quoted as saying by cricket.com.au. 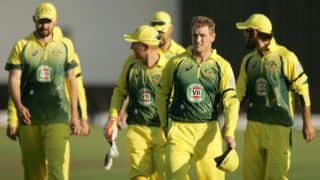