Clarke said that he needs time to recover after long flights.

Australian skipper Michael Clarke has not recovered from a hamstring injury in time for the first One-Day International (ODI) against Zimbabwe, and will not be able to play the first game. In his absence, George Bailey will lead the side.

According to a report by Indian Express, Australian coach Darren Lehmann said in a statement released by Cricket Australia, “Michael had a fitness test at training today and unfortunately hasn’t come through that well enough to be available for selection in game one. He will continue intensive treatment on his hamstring and we’ll monitor his progress ahead of game two on Wednesday.”

Lehmann also said that off-spinner Nathan Lyon would be a part of the side, and Phil Hughes would therefore miss out. “Looking at the wicket today, we’ve opted to go with the spin option of Nathan Lyon along with the extra all-rounder to add further depth to our batting line-up which means that Phil Hughes has unfortunately missed out on selection,” Lehmann said.

Clarke spoke to the media in Harare, saying, “What I’ve learned through my career is that I probably need more time than most in regards to the gap between getting off a plane and training at full intensity. If it means I have to fly a couple of days earlier than the boys on the long trips, then that’s what I’ve got to do. It’s hard because I’m a big believer in travelling with the team, I’ve always liked that.”

“Generally when I travel to the UK, there aren’t too many times that I haven’t got injured at the start of the series and I’m normally at my most vulnerable at the start of a series,” Clarke added. “So I think I’ve got to be smarter with that, or at least try and work out how I can travel with the team but also do what’s best to make sure I can play the first game.” 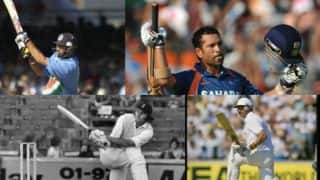