Australian captain Michael Clarke could return from injury as early as next week in a major boost on the eve of arch-rival England's arrival for the Ashes series. 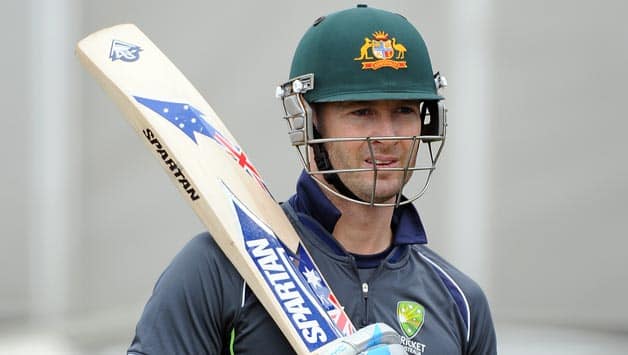 Australian captain Michael Clarke could return from injury as early as next week in a major boost on the eve of arch-rival England’s arrival for the Ashes series.

The star batsman was ruled out of Australia’s one-day tour of India this month with a long-standing back problem, and feared he could miss the first Test against England starting on November 21.

But after intensive treatment on a degenerative disc problem, which has been an issue since he was a teenager, the prognosis is good.

“Michael is progressing well and recently recommenced batting in the nets,” Australian team physiotherapist Alex Kountouris said in a statement.

“At this stage we are aiming to have him fit to play the second round of the Sheffield Shield, but we have not ruled out the possibility of him playing the first round of the Shield season if he makes better than expected progress.”

Clarke’s state side New South Wales start their Shield season at home on October 30 against Tasmania, and then play Victoria in Melbourne from November 6.

Clarke’s back problem flared up again before Australia’s final ODI in Southampton last month at the end of a gruelling five-Test Ashes tour to England, which Australia lost 3-0.

He played in that game, but selectors were reluctant to take any more risks given the big home summer coming up, and ruled him out of the India tour.

England are due to arrive in Perth early Friday bidding to win a fourth straight Ashes series — something they last achieved in the 19th century.