Michael Hussey was part of Sri Lanka tour in 2011 where he played a crucial knock of 95 and was rewarded with Man of the Series.

Former Australian cricketer Michael Hussey believes Australia’s side might be inexperienced in relation to the conditions in Sri Lanka, but is confident about them puttin on a good show when the series starts. Only three of Australia’s 15-man squad have played Test cricket in Sri Lanka earlier, whereas 8 of their players have not even played a Test in the subcontinent. Hussey himself was part of the squad which had toured Sri Lanka in 2011. He played a crucial knock of 95 and was magnificent throughout the three-Test series, earning the Man of the series award for his 463 runs at an average of 92.6. Australia won 1-0 then. FULL CRICKET SCORECARD: Sri Lanka vs Australia , 1st Test match at Kandy

Hussey stressed upon intent and approach when asked what was the key to success in Sri Lanka. He said, “Like any Test match cricket around the world or even in Australia, you’ve got to be prepared to play, good, hard, uncompromising cricket for long periods of time to win on the subcontinent,” he said. “It’s hot, it’s slow, they’re (the pitches) turning, so you’ve got to be prepared to guts it out and get stuck in for long periods of time. I feel like that (2011) team, we were prepared to do that,” as quoted by foxsports.com. READ: Muttiah Muralitharan: No grudges against Australia

Hussey feels playing in Sri Lanka for a team that hasn’t been exposed to such conditions earlier will be a tough ask. He said, “It’s going to be a challenge for a lot of the guys and that’s why it’s important they talk to each other and really help each other out as much as possible,” he said. “If you’re left to try and work your way through it yourself, it can be extremely challenging. If you work together as a team, help each other out, ask questions of each other and really work your way through it together, then the team can have a lot of success.”

He although believes the team can succeed in Sri Lanka and would just need to adjust their game as they switch from limited-overs cricket to Test cricket. He said, “There’s a lot of class in that Australian team and they’re very proud Australians; proud to be playing Test match cricket and wearing that baggy green cap. I think as a batsman at that level you’ve got to be able to change between the different formats of the game and the guys are experienced enough to do that. He added, “I’m expecting them to make the adjustment to Test match cricket in the subcontinent very, very quickly.” 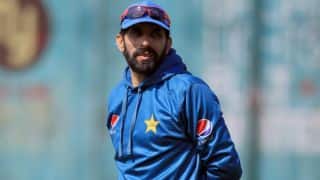 Pakistan vs England 2016: Misbah-ul-Haq describes victory at Lord's as special