Mike Brearley said it is absurd that a certain standard rule is not applicable to all participating Test teams.

Kolkata: Pulling up the International Cricket Council (ICC) for its “toothlessness” in allowing the BCCI to get away by opposing use of the umpire Decision Review System in bilateral series involving India, former England captain Mike Brearley on Saturday said the technology could not be held back for long. “I gather that the BCCI (board of Control for Cricket in India) is still against the use of the DRS. And I want to declare my point of view. I am In favour of DRS,” he said here while delivering the Pataudi Memorial Lecture. ALSO READ: Rahul Dravid delivers MAK Pataudi Memorial Lecture 2015-16: Full transcript

Brearley, arguably one of the best captains ever in cricket history, said he found it “absurd” that “everyone” except the umpires and the players taking part in a match “should know the truth about a decision on the field”.

“It seems absurd to me that there should be separate technology arrangements in Test matches involving India from those involving every other team. Imagine if all the Premier League football matches use the goalline technology, except the matches involving Manchester United,” he said speaking on the topic “In the zone, cricket, leadership and governance”.

The 73-year-old said the use of DRS was “irresistible”, despite what BCCI was doing in the short term. “Like Canute’s waves it can’t be held back.” He termed as “toothelssness” the ICC’s failure to stand up to the “arrogance” of the BCCI.

“It’s a sign of the toothlessness of the ICC and the arrogance of the BCCI that this is allowed to happen. The BCCI should argue their case as forcefully as they can, but go along with the vast majority,” sid Brearley.

He argued that not only the players, even the umpires wanted the DRS, and expressed support for the hawk eye technology, saying “the predicted path is more accurate than the line decisions”.

Brearley claimed DRS has led to improvement in players’ on-field behaviour and also umpiring. However, he agreed with the BCCI that the regulations governing DRS were not perfect.

“There are problems that result from the limits on the numbers of review allowed.” He suggested that conversations between on-field umpires and TV replay umpires should be heard by players, spectators and viewers. “It will be better if all reviews were in the hands of the umpires,” he said. 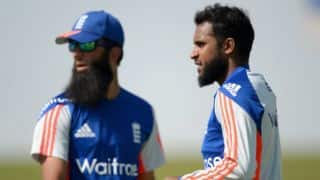