Wellington: New Zealand coach Mike Hesson has urged his side to continue keeping their foot on the throat of Sri Lanka and come even harder than before in the third One-Day International (ODI) of the five-match series. Earlier, Martin Guptill made an unbeaten 93 from a mere 30 balls to help New Zealand cruise to a 10-wicket win over Sri Lanka in the second ODI in Christchurch. Ahead of the third ODI, Hesson said that his side had managed to put the opposition under pressure, and called on New Zealand to maintain the same standard in the upcoming matches as well, Stuff.co.nz reported. FULL SCOREBOARD: New Zealand vs Sri Lanka, 3rd ODI at Nelson

Echoing similar views, batting coach Craig McMillan said that they were making every possible effort to keep the players on their toes, adding that his side would come extremely harder against the tourists in the third match. New Zealand is leading 2-0 lead in the series against Sri Lanka. The Kiwis won the opening ODI by seven wickets at Hagley Oval. In the second ODI, Sri Lanka won the toss and elected to bat first on a surface which was conducive for bowling. New Zealand bowlers did a remarkable job in restricting the visitors to a mere score of 117 inside 28 overs. Matt Henry and Mitchell McClenaghan steamed in to run riot in the Sri Lankan ranks and accounted for seven wickets between them. ALSO READ: Mike Hesson: Kane Williamson will continue good form into day-night Test vs Australia

But what made the headlines, was the glittering knock which created numerous records at Christchurch. New Zealand chased down the modest target in mere 50 deliveries with all ten wickets to spare. For the record, New Zealand occupy three slots — fourth, sixth and seventh — in the list of 10 fastest run chases ever in the history of ODI cricket. The third match will be played at Nelson’s Saxton Oval on New Year’s Eve. 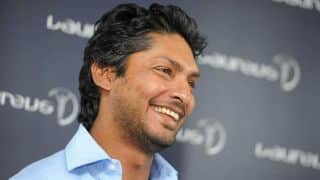