Misbah-ul-Haq denies rift within Pakistan team against his leadership

Misbah-ul-Haq denies rift within Pakistan team against his leadership

Under-fire Pakistan captain Misbah-ul Haq has denied suggestions of a revolt against his leadership after his team's poor performance against South Africa in the United Arab Emirates. 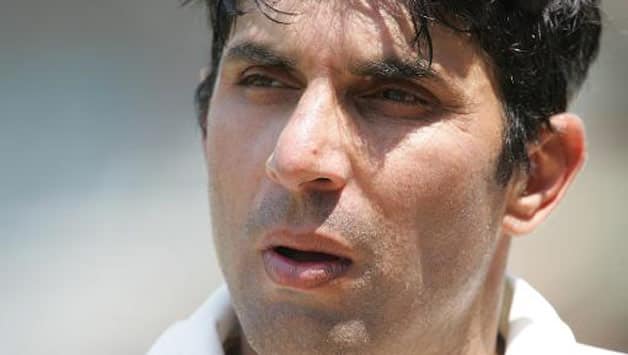 Under-fire Pakistan captain Misbah-ul Haq has denied suggestions of a revolt against his leadership after his team’s poor performance against South Africa in the United Arab Emirates.

Misbah’s position as one-day captain was seen as under threat after Pakistan suffered a 1-4 One-Day Internationals (ODI) defeat in the UAE, but he will retain the position for a short limited-overs series in South Africa.

In a rare television interview in which the country’s cricket board chief also grilled him, Misbah denied that his team lost because some players were at odds with his captaincy.

“I don’t believe in that. If I have done bad against anyone, then I can expect (dissent), but if I am honest with them and help them then I don’t think such a thing will happen,” he said on a Geo Television programme.

Najam Sethi, appointed in June as interim chairman of the Pakistan Cricket Board (PCB) in June, clarified that he was asking questions as a TV anchor and not in his capacity as chairman.

“Every player has his own style. Inzamam-ul Haq‘s general posture was never aggressive, he never looked aggressive but that doesn’t mean he never hit sixes, he was an aggressive batsman. Don’t I hit sixes, don’t I use aggressive fields?” he questioned.

Misbah, whose 1,119 runs makes him the highest scorer in one-day cricket this year, refused to accept criticism of the pace at which he scores his runs.

“My strike rate is okay. I have scored most runs this year but they still criticise my style and my strike rate,” he said.

Misbah will join the team in South Africa on Monday.

Sachin Tendulkar: An ideal coach should be a player’s friend